Your Handy Guide to Holiday Shopping in Huatulco

So here you are in Huatulco, and it’s hot and sunny, and it’s hard to pick out the poinsettias from the bugambilias and flamboyants. Only a few Christmas carols are making it through the mariachi Muzak at the supermarket. But . . . you’re shortly due back in the land of holiday celebrations. Is it possible to shop for gifts that rise above souvenir status? Oh, most definitely!

One stop shopping.
Your first stop should be the Huatulco Christmas Fair (La Feria Navideña), set for Sunday, December 6, in the plaza around Café Huatulco in Santa Cruz. Organized by a group of long-term Huatulco residents, The Fair will benefit a rural school in Derramadero, a village down the coast near Pochutla; the Derramadero school has been adopted by sculptor Richard Saunders and his wife, life coach and Hatha Yoga instructor Susan James. The Bacaanda Foundation, which runs the overall adoption program for rural schools in southern Oaxaca, will have a table of artesanías that benefits all the rural schools, adopted or not.

Artists and artisans from Mexico, the U.S., and Canada will have their creations on sale from 10:00 AM to 6:00 PM. Here you can find work by established artisans like Freddy Bautista Vicente, whose weaving shop is nearby (see below), or alebrije wood carvings by master artist Lino Ortega Mijangos. There will be icy glass ornaments by Colorado glass artist Mary Ahlbrandt, artwork in different media by U.K. painter Fiona Nichols, pearl jewelry by Noemi Ortega, and embroidered clothing and bags from the Isthmus selected and sold by Irasema Toledo, and much, much more.

Another art-and-artisans’ bazaar kicked off at the end of November; Baz Arte held its first market at the Amigos Haus hotel at Boulevard Santa Cruz 116 (past Hacienda Real, on the way to the western beaches). Plans are for a monthly edition—check their Facebook page to see whether it’s started yet: http://www.facebook.com/AmigosHaus/.

Local Markets.
There are two markets in Huatulco that, with careful shopping, could produce quite nice holiday gifts. You will not be buying top quality authentic merchandise, but with care you can find very attractive wares. Besides, it’s fun to troll the stalls and see what’s there.

The market in Santa Cruz is located between Santa Cruz Boulevard (the “main drag”) and the central park in Santa Cruz (anchored by Café Huatulco), and is filled with souvenirs and small things to attract tourists and beachgoers, including pottery, alebrijes (the fantastical animal sculptures that virtually symbolize Oaxaca), and casual jewelry. On the side closer to the water are a couple of jewelry shops that sell better silver-and-semi-precious-stone pieces.

The muncipal Mercado 3 de Mayo in La Crucecita, located in the block between Guamuchil (the street that runs into the main square) and Guanacaste (the next street north) carries a broader array of merchandise, including food items. In Mercado 3 de Mayo you can buy tequila, mezcal, and other liquors sometimes for less than in the specialty shops; there is a wide array of Mexican-style blouses and woven tablecloths. Like the market in Santa Cruz, there’s a lot of pottery, including the black (barro negro) pottery from San Bartolo Coyotepec and green (check whether the glaze is lead-free) and multi-colored pottery of Santa María Atzompa (both places are in the mountains near Oaxaca City).

The trick to shopping in such chock-a-block conditions is to remember that these are partly mass-produced goods, that the Talavera ware is vividly decorative but it’s a knock-off, that the colors in very brightly striped napkins and place mats bleed like crazy, etc., etc. Then pick up something you like and isolate it so you can really see whether it’s what you want. This merchandise is available in any number of smaller shops throughout Santa Cruz and La Crucecita. 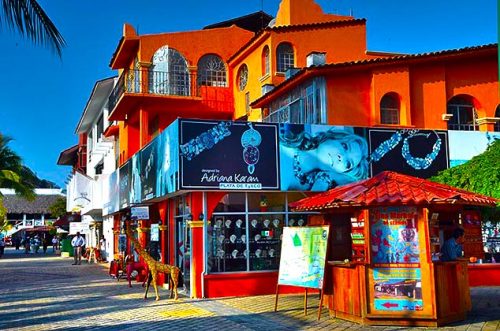 If you are willing to pay more—you will definitely get more—you can buy clothing and table linens produced locally and imported from other areas of Mexico, in particular the Isthmus; Mexican rugs; authentic pottery and alebrijes; custom and high-end jewelry; and specialty mezcal, the latest thing for liquor aficionados. (New York City is reportedly replete with mezcalerías—Casa Mezcal, 86 Orchard Street on the Lower East Side, also features authentic Oaxacan food.)

There’s a lot of potential for gifts right around the main plaza in La Crucecita. Three interesting choices are Hecho a Mano – Hecho en México, on the north side of the square (Guanacastle 311), next to an ice cream place; Oro Verde, a coffee, tea, and chocolate shop on the west side of Bugambilia, in the middle of the first block north of the square; and Bioamigables de Huatulco, on the south side of Guamuchil as you enter the square (at 208 Guamuchil, Local 3). Bioamigables is your best source in Huatulco for organic products—they carry foodstuffs, cosmetics, biodegradable storage bags and tableware, and cleaning products. Among the cosmetics are some made by a cooperative in Mazunte that arose after turtle hunting was banned.

Hecho a Mano carries art supplies, particularly paints, that will let you do your own “hecho a mano,” as well as Oaxacan black pottery (including earrings), interesting alebrijes (look for the octopi in the cashier case), a wide variety of Day-of-the-Dead figures, and brightly painted wood pieces. Oro Verde sells local organic coffee, grown in the environs of Pluma Hidalgo, in the mountains above Huatulco, as well as chocolate casera, or ground chocolate. Remember that Mexican chocolate is flavored for preparing hot chocolate, usually with cinnamon, nutmeg, vanilla, and often a touch of hot pepper. Oro Verde also carries mole mixes, typical Mexican sweets, and handcrafts.

A little farther afield, but still in La Crucecita, you can find higher-end Oaxacan artesanías at the Museo de Artesanías Oaxaqueñas at Flamboyan 216 (south side of the street, next building east of the Oasis Restaurant). Here you will find pottery, alebrijes, rugs, table linens, hammocks, and a wide range of additional Oaxacan products. The two weaving shops that make table linens on site and sell clothing from different regions of Oaxaca are Textilarte, a block farther east at Flamboyan 116, just past Carrizal (www.textilartehuatulco.com/), and Cre-Arte, one block south at 403 Carrizal (on the southeast corner of Chacah). Textilarte is the larger of the two, and carries an immense array of dry goods you can explore with the rhythmic clacking of wooden looms in the background. Cre-Arte is smaller, but if you’re looking for table linens, it has full-sized cotton dinner napkins in a variety of colors.

There’s an unusual shop, Maica Jewelery Design (www.maicadesigns.com/), at the west end of Chacah, past Gardenia in the middle of the south side of the block. Carolina Schwarz combines skilled design with semi-precious stones traditionally associated with different kinds of healing; she also makes necklaces and earrings using both black pottery and colorful clay beads, as well as colored clay encasing beach shells. The shop also carries crafts from throughout Oaxaca, other Mexican locations, and South America.

Back to Santa Cruz. Perhaps the best collection of Mexican rugs and wall hangings in Huatulco, along with some clothing and woven bags, is found at the Tienda Cooperativa Arte Popular Zapoteco, a family shop run by Freddy Bautista Vicente. While Freddy weaves rugs on site, much of the work is done by his family up in Teotitlán del Valle, the town near Oaxaca City best known for its rug weaving. The Tienda, mostly referred to as “Freddy’s shop,” is one of the stores on the ground floor of the Ocean Park condominiums, just off the park in Santa Cruz at Calle Mitla 402; Freddy is in Local 8.

Along the Dársena de Santa Cruz, the street that runs along the harbor out to the cruise ship pier, you will find some very expensive stores that cater to the cruceros, the people who come off the cruise ships to explore Huatulco. There is beautiful jewelry at Maria Bonita, as there is at Daniel Espinosa in the Marina Real Blue condos on Av. Santa Cruz as you enter Santa Cruz. More in line with smaller-but-nicer holiday shopping is the Galería Rubín at the beginning of the Dársena, at the curious Mexican address of Manzana 20, lotes 8 and 9. It’s a terra-cotta-colored building with an open penthouse three floors up that is home to the gallery. Started by artist Susana Rubín, the gallery shows the work of many different artists, but it also has “tienditas,” small shops with crafts that would make great holiday gifts.

A short taxi ride or a twenty-minute walk (there’s a big hill) from Santa Cruz on Avenida Benito Juárez brings you to Plaza Chahue, a small mall that includes Century 21 Realty and an Interjet ticket office on either side. At the back of the Plaza, in Local 12, you will find La Fortuna, a shop that specializes in artesanías and regalos (gifts). La Fortuna carries a lot of onyx pieces (lighting fixtures, vases, bath accessories), hand crafts, a few consigned pieces of antique Talavera work, and pottery and stone animal figures, among other wares. La Fortuna has an irregular schedule, but has several numbers posted on the door you can call to have the shop opened to look or to make a purchase.

You’ll definitely need that taxi if you missed the Bacaanda Foundation’s table at the Huatulco Christmas Fair. The Foundation, known in Huatulco by its Mexican nonprofit name El Sueño Zapoteco, operates a workshop and retail store in Tangolunda, in the Centro Comercial Punto Tangolunda (the first set of commercial shops, across the street just before the Barceló Hotel). The retail store carries work by artisans trained and employed by the Foundation, crafts from other areas in southern Mexico and Central America, and some things—homemade soap, appliquéd aprons—made by supportive volunteers to benefit the Foundation. There are things here not found elsewhere in Huatulco, plus the chance to learn about the Foundation’s work with the rural schools surrounding the resort.