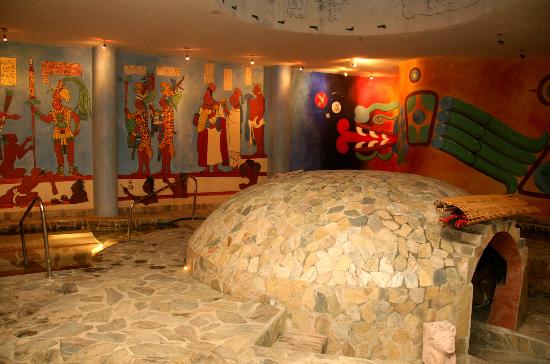 Temazcal is a ritual vapor bath with pre-Hispanic origins.  The Conquistadores attempted to eradicate all Mesoamerican practices but this purifying custom survived and in recent years has experienced a resurgence.  The concept is are not unique to Mesoamerica; the North American Indians held sweat lodges, Turkey had steam baths, hot Japanese baths are known as “ofuru” and the Scandinavians developed what is commonly know as a sauna.  The primary difference between the Temazcal and many other hot baths around the world is that the focus of temazcal was medicinal.

The ancient  Mesoamericans used it as part of a curative ceremony to purify the body after exertion, which likely helped to deal with inflammation, joint pain and muscular disorders. It was used as a remedy for a variety of illnesses including, respiratory and digestive complaints and was associated with treating various conditions related to the female reproductive system.

The temazcal is a clay structure usually shaped much like an igloo.  Water is thrown over hot lava rock to produce steam, intensifying the heat inside.  Temazcals normally reach a temperature of 104F and as the heat induces sweating, it detoxifies the body.  Various leaves and grasses such as eucalyptus, rosemary and mugwort, are added to the vapor which helps cleanse the body, mind and soul.

There are four locations within Huatulco to experience Temazcal each offering a slightly different experience.  Location and contact numbers can be found on the health and beauty services page. 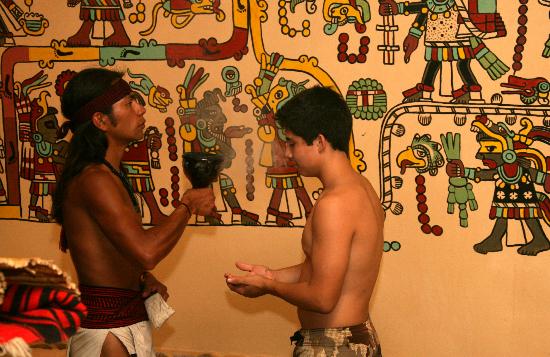 1.) In spite of being in the center of a high traffic tourist area, the Eco Spa has done a wonderful job on incorporating a temazcal into the outdoor portion of their facility. It has a lovely calm atmosphere surrounded by bamboo and palm.

The Eco Spa is the only one that conducts a ritual whether there is one participant or several.  First you are sprinkled with a branch of basil dipped in water before entering the tamazcal.  You are instructed to back into the opening of the temazcal so that you are facing the world as you enter.  There is a wooden bench built around the clay dome and in the center, lava rocks sit over the fire. A tray is placed over the rocks with bowls containing aromatic herbs, mud and water.  The temazcal is tepid in the beginning but the heat soon becomes intense as water poured over the rocks creates a thick steam.  A bowl of earth is passed around the circle for each person to apply mud over their face. The leader begins by giving thanks to the four elements: earth, air, fire and water.  He instructs you to breathe deeply as he gently beats on a drum.   You are asked to think about your life and to drive out bad thoughts and sadness.  Guiding you through the ceremony the drum beat become more intense and when he shouts Fuerra!! (Out!!)  negative energy is released.   This cycle is repeated several times lasting for about 30 minutes. Leaving the temazcal face forward, the same direction as you entered, it is believed that you have been reborn from “Mother Earth”, purified in body,mind and soul.

Following the temazcal ceremony you take a cool shower to close the pores and are given a refreshing drink while you sit and relax for a few minutes.  Finally you receive a 10 minute spinal massage.  Adjacent to the temazcal area there is comfortable seating where you can relax until you are ready to leave.

Cost for the temazcal ritual with spinal massage is 295 pesos.  Add a 1 hour massage for a total of 595. Transportation is complimentary. Bring something light to change into like a sarong wrap or boxer swim trunks for men.

2.)  Tamazcal Maya is located just before Santa Cruz.  This facility is surrounded by high walls and especially at night it offers an enchanting atmosphere with exotic pre-Hispanic music and the rich scent of various herbs and incents infusing the air.  They have 2 domed shaped Temazcals structures with cement benches around the parameter.  A basket of mixed herbs is placed over the hot lava rocks in the center with heat and steam coming from beneath the rocks.  Prior to entering the temazcal you are given a series of breathing exercises to repeat while inside but no one accompanies you.

The 30 minute vapor bath is followed by aroma therapy.  While laying flat with your body and forehead covered, the staff wave fragrant smoke made from incense, mir and copal.  As you relax in this position for 20 minutes the staff beat on various pre-Hispanic percussion instruments.  This is followed by a cooling shower with several jet sprays. Finally you cover yourself with mud found deep in the ground around San Miguel del Puerto.  This mud bath is an excellent exfoliator and after rinsing, your skin feels smooth and tingly.  Before receiving a short spinal massage with herbal oils, you are offered a cool drink to help with rehydration.

The cost with a brief spinal massage is 300 pesos, with an hour long massage it would be 600 pesos. Transportation is complimentary. Bring a bathing suit, towel and sandals. 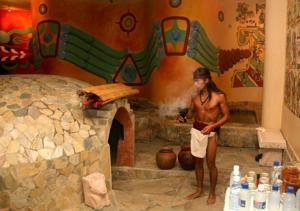 3.) The Xquenda Spa in Chahue has an elaborate area for temazcal.  The large room is partly covered, with an opening in the center so that the enormous domed temazcal structure is under the sky.  The walls are covered with intricate painting of pre-Hispanic codices; the floor is stone with several Jacuzzi tubs set into it along the walls.

When they hold a ceremony it is conducted by a temazcal master with the ritual inside the vapor bath lasting for an hour and a half followed by hydro therapy in a series of progressively strong jet tubs.   Unfortunately, unless there is a group of 10 or more people, they do not conduct a ceremony and use small individual cubicles that would resemble a modern steam bath.   They plan to have a master available for most of January but otherwise, if you want to arrange a group ritual, they need about two weeks notice.  The temazcal ceremony, when available is 400 pesos per person. The individual steam is 200 pesos.

4.) Temazcal J is located in a residential section of La Crucecita.  It is set in a pleasant garden with an upper terraza.  The two clay structures are rectangular rather than the traditional domed shape.  They offer you cards in either English or Spanish to conduct your own ritual of breathing, liberating and self reflection.  Following the temazcal you cool down in a plunge pool before ascending to a second level for a mud bath and 10 minute spinal massage.  The cost is 350 pesos or 550 with a one hour massage.  Bring a bathing suit, towel and sandals.

Pregnant women or anyone with a history of diabetes, heart disease, coronary artery disease or stroke should check with their doctor as the extreme temperature could complicate their condition.  Participants should be well hydrated and avoid alcohol, bananas, milk and smoking prior to entering a temazcal. If you feel light-headed or dizzy at any time during the session you should leave the temazcal immediately.

Brooke Gazer operates a bed and breakfast in Huatulco www.bbaguaazul.com and is also a writer for the popular Huatulco Eye magazine.