If you love surfing, you love surfing in Puerto Escondido and staying in luxury just 30 minutes from a world class surf spot and yearly stop for the Word Surf Tour. The following is a summary from the TomZap website. Be sure to check the surf report before you head down. 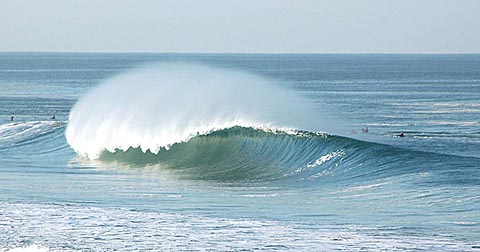 Puerto Escondido, The Mexican Pipeline. Everyone’s heard of the place and many have given it a try. But how much of the Escondido legend is true and how much is myth? The truth is that Puerto can match its reputation, if you are willing put in the time it takes to know the place.

The first thing you need to know about surfing in Puerto Escondido is about the waves. The surf is seasonal, varying from small to medium in size during the dry season (November to April), and from small to big during the rainy season (beginning in early May). The change of seasons is dramatic, occurring within the space of a week and bringing with it an equally sudden increase in wave size. We encounter our first myth: With the change of seasons–and wave size–wave quality diminishes. Somehow this myth has remained a feature of Puerto’s lore when in fact, the quality of Escondido’s surf actually increases immediately after the rainy season begins. An added feature during this time of year is that the evening session is often accompanied by strong offshore winds which can result in world class conditions.

You can surf Puerto Escondido at four locations: Zicatela Beach, The Point, Kiddie break, and another spot I won’t tell you about. Zicatela–the infamous Beach Break (see Murray Redd’s photos) is why people go to Escondido. Myth number two. Surfers often describe the Beach Break as a closeout with an occasional peeler thrown in to keep you hanging on. But experience proves this untrue. The wave is fast and unforgiving, but much more makeable than commonly believed. It takes time to learn the in’s and out’s of the place; however, few surfers want to hang around for the amount of time it takes to get the place wired. 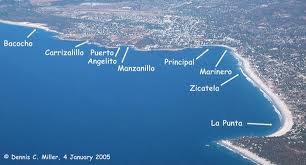 The most commonly surfed section of Zicatela Beach is the break closest to town, which is primarily a right-hander. This section is photogenic (see Chris’ photos), powerful and possibly the fastest wave in the area. It also provides the deepest tubes, both makeable and otherwise. The wave sucks off the shallowest section of the bar, at times leaving you perfectly slotted in and comfortable, a foot or two below sea level. The crowd here can be fiercely competitive, though, so be ready to commit yourself and watch for drop-in’s.

What do you think about Surfing in Puerto Escondido?