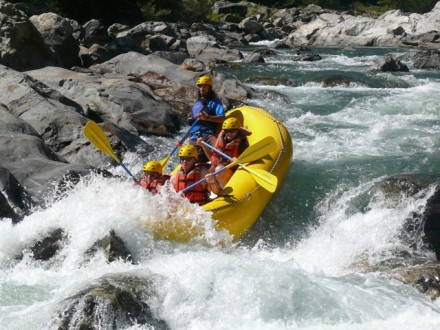 If you’ve ever been to Playa La Bocana and strolled down this little gem you will find where the Copalita River runs down from the Sierra Madre into the Pacific. The waters of the Copalita flow through deep canyons with rich and abundant jungle vegetation and high cliff walls. The river offers some of the best white-water rafting and kayaking tours in this region. There are three different divisions of the Copalita, with rapids ranging from Class 1 to 5. Rafting is one of the spectacular things about this river. During your float you will encounter many species of birds that reside in and migrate to Huatulco. The trips can be relaxing, exciting, thrilling and you can expect a lot of laughter.   What can be better than that!

I’ve experienced three float trips down the Copalita River. My first trip was unguided in an inflatable kayak with another inexperienced kayaker. Double trouble! Thankfully we entered the river at a point that we wouldn’t ride anything considered a rapid. This was in November and because of the rainy season the river was flowing swiftly. In the first 5 minutes we lost a paddle, but luckily we recovered it with some fancy maneuvering. Once that escapade was over we began to spin in circles and started to go down the river backwards. Ra-roh. After we recouped and appeared to be heading down in the right direction we hit rock bottom on the bank of the river and tangled in the rich and abundant jungle vegetation. We were more than inexperienced. We were Abbott and Costello meets the River Monster. There were a few more obstacles along the way but we were improving on our navigating skills. The challenge was definitely worth it, but decided that the next trip down the Copalita would be with a guide.

The most recent raft trip I encountered was a Class II – III, which means it was a much rougher, faster and exhilarating ride down the Copalita. Before you begin the float you are given a lesson from your guide on how to handle the rapids. When you’re being tossed back and forth, trying to hold yourself up on the side of the raft and still trying to paddle while screaming and laughing, who can remember those damn instructions? Not me! Although the guide was shouting out the commands over the sounds of the rushing water, I was too engrossed in trying to keep myself safe inside the raft. Exhilarating to say the least. If you are a novice, DO NOT TRY THIS ALONE!

This next float trip was the Full Moon Float that we reserved with Leah Guzmán at Aventura Mundo. This is a must-do if you’re lucky to be in Huatulco during the full moon. You gently float down the Copalita guided by the moon. It’s serene, relaxing and peaceful as you gaze up at the moon and stars. My kind of rafting for sure. But the trip doesn’t end there. When you arrive at Playa Bocana you are greeted with a welcome reception of a glowing, candle-lit path leading you to a bonfire. There, you are served appetizers, soft drinks, beer and wine, along with the sound of the waves from the Pacific and the astonishing full moon. Also included in this amazing adventure is pick up service from your hotel to the river, a return ride home and great company. You can’t beat all that for $60 USD. Aventura Mundo offers many other tours and rentals. If you are up for an adventure, reservations can be made at their office in Tangolunda across from Dreams Hotel or contact Leah at 958.100.7592.

By Renee Biernacki – The Eye, Huatulco