Mexico is having a moment, as they say: Last year, over 25 million Americans flocked south of the border to bask in the country’s sun and sand — bolstered, no doubt, by an (unfortunately) depressed peso. And while Mexico’s bustling capital city and beach resort spots like Cancun tend to trap most of the tourists, the southeastern coastal state of Oaxaca is quietly attracting more and more flies.

It’s not just the delicious mole and mezcal that make Oaxaca so damn appealing. It’s the perfectly preserved colonial architecture, lush green mountain ranges, and — most importantly, at this frigid time of year — about 70 miles of pristine Pacific coastline. Head towards the water and you’ll find a string of beautiful, unpretentious beach towns offering rest and relaxation of the highest caliber. Park your umbrella on just one, or hit ’em all: beach hopping > bar hopping. 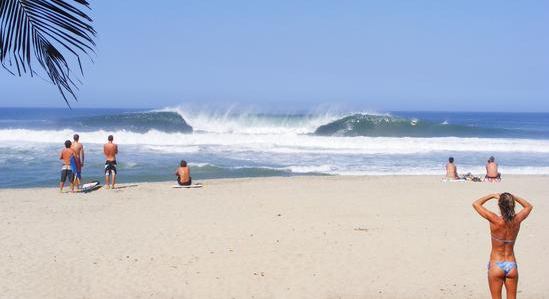 The Oaxacan coast’s largest and most well-known town is still blissfully low-key.

Puerto Escondido perfectly encapsulates what’s so great about the Oaxacan coast, or Costa Chica, as it’s more commonly known. While it’s well-touristed and moderately developed, it still feels pleasantly authentic, without any of that cookie-cutter resort town aesthetic that plagues so many of the country’s other hotspots.

This active fishing port is beloved by the international surfing community: Most days, Playa Zicatela’s Pipeline boasts some bodacious waves, and that’s where you’ll find the boarders. Swimmers and beginner-level surfers should head to Playa Carrizalillo, a U-shaped cove ringed by lush greenery where the waves are gentle enough for a dip.

Zicatela is loaded with bars, cafes, and restaurants of every stripe, from low-key watering holes to classy seafood spots. Beach-goers looking to party won’t be disappointed, either. Bands and DJs keep things lively well into the late night.

Where to eat: For breakfast, the place to be is El Mana (Calle del Morro), which pours strong coffee and plates fresh-baked bread and fluffy crepes. For lunch or dinner, splurge at Espadin (Avenida Carrizalillo), owned by chef Patricio Sandoval of Chicago’s Mercadito. Dig into the delicate seafood dishes and feast your eyes on the beautiful view of Playa Carrizalillo below.

Must-do: If you’re visiting between the months of August and December, you’re practically obligated to check out Laguna de Manialtepec, a lagoon that’s lit up at night by bioluminescent plankton. Take a guided boat tour, or simply bathe, literally, in the electric-blue glow of the tiny ocean critters.

Known simply as Huatulco to the locals, this former fishing village saw a boom in development starting in the ’80s — but don’t let the word “boom” throw you. Buildup has been modest in scale, the town never feels overcrowded even during peak season, and it’s maintained a laid-back charm that’s rare for a resort community.

Huatulco has a series of seven turquoise-blue bays that are calm, clear, and excellent for swimming. They also host a splendid array of marine life, so snorkeling is the thing to do here. A range of hotels and resorts are sprinkled among the bays, while the small, leafy center of town, La Crucecita, is anchored by a tranquil public plaza and packed with plenty of restaurant options, from no-frills Mexican diners to buttery French bistros.

Where to eat: Everyone in Huatulco knows Terra-Cotta (Calle Gardenia), not only because it’s air conditioned and therefore in high demand, but also because its wide-ranging menu of Mexican and international dishes is rock-solid, whether you opt for the grilled catch of the day or a margherita pizza. Down the street, Giordana’s Delizie Italiane (Calle Gardenia) is a surprisingly authentic trattoria serving 100%-from-scratch pastas.

Must-do: Snorkeling is affordable, accessible, and highly encouraged. Your best bet is to head to the harbor at Santa Cruz, where you can rent gear for 130 pesos for the day; then, hire a lancha (motor boat) to take you to the coral reefs located in La Entrega, San Augustin, and Cacaluta. 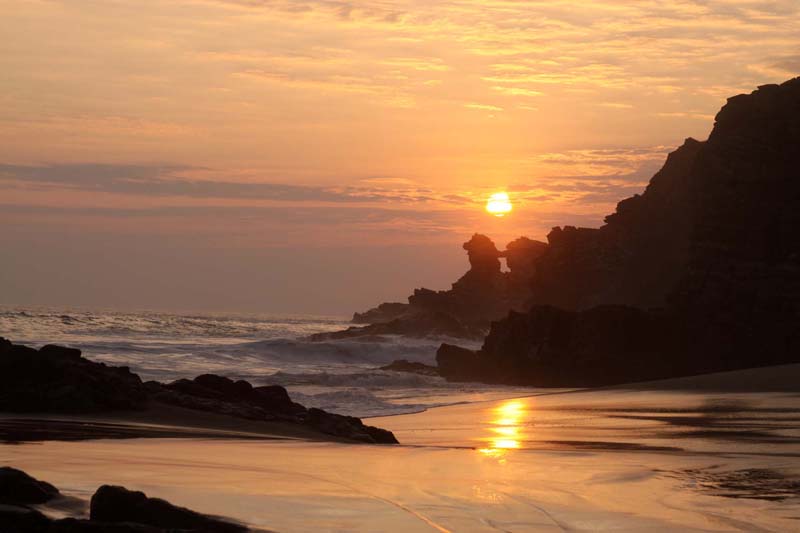 Mazunte has become something of an international playground for harem pants-wearing, essential oils-scented alternative types hailing from Canada, France, Britain, and further afield. The water is the main attraction: gentle aquamarine waves that are among the most swimmable in the area.

When you descend from your hotel or hostel, you’ll find a number of entrepreneurs staking beach umbrellas into the sand for you. Rent one for the entire day for just 100 pesos (about $5 USD). As you lounge and swim, other enterprising souls will roam the beach: a machete-armed man trimming fresh coconuts to drink, señoras balancing tamale- and taco dorado-laden baskets on their heads, groups of teenagers from the local bakery hawking a variety of sweet and savory pastries. The farthest you’ll need to roam from your towel is a few meters to the back of the beach, where little bar-huts dispense shots of mezcal, or provide you with a Styrofoam cooler full of ice and bottled beer that you can sip under the shade of your umbrella.

Where to eat: For a non-sandy meal, stray to the town for thin-crust pizzas and a decent selection of imported beers at La Empanada (Paseo del Mazunte), or stop in for a kale-enhanced green juice at El Tiburón (Camino del Rinconcito).

Must-do: Climb up to take in the dramatic sunset from Punta Cometa, a rocky outcrop that delivers the region’s absolute best view of the horizon. 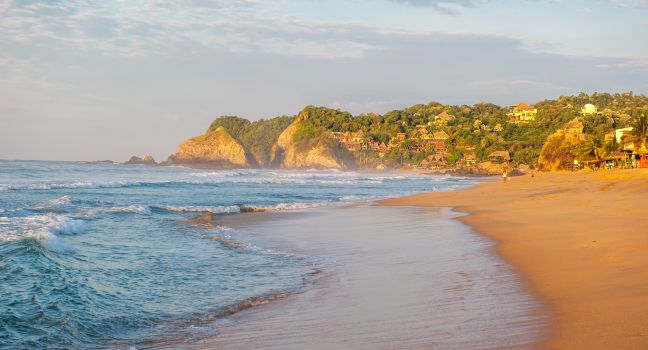 A sort of “Mazunte-lite,” this town offers many of its neighbor’s charms with a more grown-up vibe.

As laid-back as Mazunte is — and yeah, it’s pretty laid-back — the sheer volume of young, tattooed pleasure-seekers can sometimes be a not-entirely-welcome distraction from your beach read. For those seeking the same beautiful coastline, tasty food, and lazy afternoon micheladas, but with fewer waterfront bongo circles and a slightly older crowd, neighboring Zipolite is the perfect choice.

Tiny Zipolite enjoys an outsized reputation as a nudist paradise: In point of fact, the only remaining nude areas are clustered at the extreme west and east ends of the mile-long beach. In between, there’s just sun, soft white sand, and the roaring of the ocean. The waves here are choppier than in Mazunte, and the area is not safe for swimming, though bodyboarders and surfers can still do their thing.

Where to eat: Just steps from the beach, the neat, orderly town of Zipolite consists of just a few gridded streets, but there are still plenty of brightly painted shops and restaurants to peruse. The best seafood eatery in the area is Piedra de Fuego (Calle Mangla), an open-air, family-friendly joint that specializes in grilled catch-of-the-day. Ask for it a la talla, butterflied and crusted with a crimson-red, subtly spicy chili paste.

Must-do: In the mornings, usually at 8am, motor boats depart from the beach on guided tours that offer the opportunity to spot whales, dolphins, and sea turtles. Trips usually last 2.5 hours and cost 200 pesos. Arrange a reservation with your hotel, or just scout around for the guides on the beach.

For beachgoers seeking more than just sun and sand, Chacahua, one of the Costa Chica’s lesser-known destinations, is an ideal getaway. While it’s right on the coast and has its fair share of beautiful beaches, the main attraction is the expansive Parque Nacional Lagunas de Chacahua, where turtles, crocodiles, and shore birds frolic. The area is a must-visit for nature lovers, especially those who want to disconnect; there’s still very little Wi-Fi or internet here.

Accommodations in the area tend toward the very rustic — just a few scattered cabanas, as well as some private rooms offered by the larger restaurants in town — and affordable, with few frills. Other than the wildlife, there’s not much to do besides lie on the beach, sip a cerveza, and enjoy the calm tranquility of an as-yet-undiscovered gem.

Must-do: Explore the lush lakes and mangrove forests of the national park. Speak with your accommodations about hiring a local guide, who will pilot a boat through the five major lagoons and chat with you about all the incredible flora and fauna you see along the way.