Taking the Mystery Out of Dried Chiles 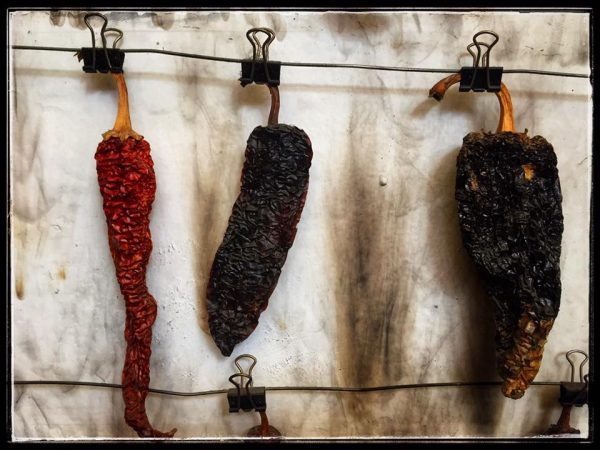 Walking through a food market or any major grocery store in Mexico you are likely to find piles of dried chiles. A staple in Mexican cooking, they are rated from 1-5 on a hotness scale, 1 being mild. (Ultimately, pepper hotness scales are based on Scoville Heat Units, developed in 1912 by Wilbur Scoville, a chemist working for Parke Davis Pharmaceutical Company.) Dried chiles have a lower, slower burn than their fresh counterparts, and are perhaps sweeter.

Ancho Chile (Mild 1) This dried form of the poblano chile is possibly the most widely available of all dried chiles. Like the fresh poblanos, they can be a bit tricky because different peppers from the same plant can vary substantially in heat intensity. They appear dark brown, wrinkled, and are described as having a sweetness resembling raisins.   Substitute: mulato (darker, sweeter with earthier, more pungent flavor) or pasilla chile.

Chile de Arbol (Hot 4) Also known as either bird’s beak chili or rat’s tail chili. This is commonly found in powder form but the whole dried chile has more flavor. Since their distinctive bright red color does not change upon drying, these peppers are often used to decorate wreaths. Substitute: cayenne pepper.

Chipotle Chile (Med 3) Pronunciation: chih-POHT-leh Like the chile mora, this is a ripe jalapeño. The difference is that it has been dried using a smoking process, which adds a wonderful rich smoky flavor to soups and sauces. They are usually reddish brown, but may also appear a lighter brown color. 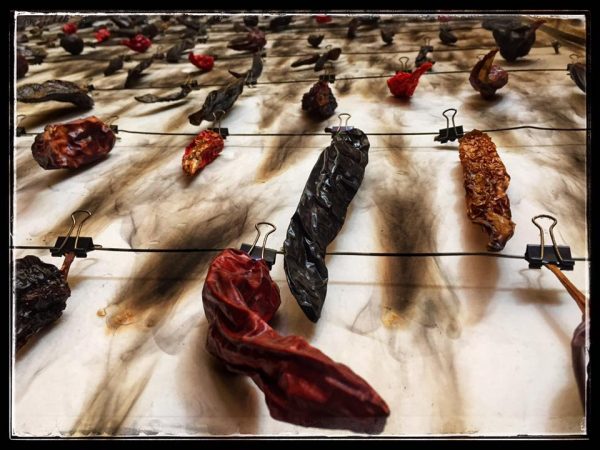 Guajillo Chile (Med 2) Pronunciation: wah-HEE-yoh… This chile has a smooth, shiny, burgundy-colored skin. Since the skin is tougher than other chiles, it needs to be soaked longer. The second most popular chile in Mexico, it is the dried version of the chile marisol. Guajillo translates to “little gourd” due to the rattling sound made by the seeds when the dried pod is shaken. The guajillo is said to have a mild green tea flavor with berry overtones and may be used to make a salsa with a slightly sweet taste and a surprisingly hot finish.

Mora Chile (Med 3) This is a red jalapeño, it is either sun dried or oven dried. If the same pepper is smoked it is referred to as chipotle. They are usually red to reddish purple in color.

Mulato Chile (Mild 1) This is the swarthier version of the ancho chile. They both derive from the poblano chile. but this one is left on the vine longer, ripening to a deep red color. This gives it a fuller, richer flavor, as well as making it sweeter than the greener variety. The dried mulato is flat, wrinkled, and dark brown to black in color. The size averages 10cm in length and 5 cm in width. Some describe it as tasting of both chocolate and licorice. Substitute: ancho chile

Pasilla Chile (Mild 1) Pronunciation: pah-SEE-yah The pasilla Is also known as chile negro or pasilla negro.   This is the dried version of the chilaca chile. They are sometimes mislabeled as anchos and vice versa. The pasilla chile tends to twist as it dries, has a dark, wrinkled skin, is 20-25 cm long and is narrower than an ancho chile. Substitutes: ancho chile (sweeter) or mulato chile (stronger, earthier flavor).

So, now that we can identify one from another…

How do we do we use them?

Toast: This step only takes a few seconds but is essential to getting the most out of your chile. Heat a comal, a grill or a simple fry pan, and drop the chile onto the surface, after a few seconds, turn it over. If the chile is bent use a spoon or fork to flatten it onto the heated surface. Be careful not to burn them, since this will be reflected in your final product. Toasting strongly infuses more chile flavor into a dish and makes the dried chiles more pliable, easier to work with and quicker to puree in the blender.

Remove the seeds: Using kitchen shears, cut the stem off the top and split the chile down one side. Most of the seed will shake out. Use a knife or the shears to pop the rest of the seeds off the surface. If you do not get all the seeds, they will not hurt you, but will make the dish hotter and some can be hard on the stomach. 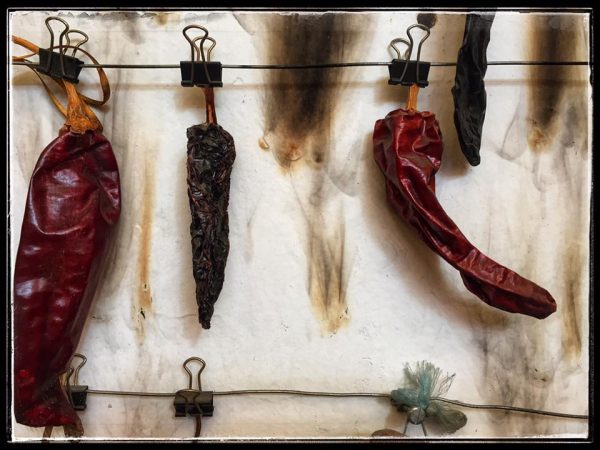 Soak: Place the chiles in a bowl and cover them with hot water. Let them soak 20-30 minutes depending on how thick they are. Use a spoon to occasionally push them under the water if they float. Do not over soak or they will become bitter. The water will become brown like very diluted coffee. Depending on the chile, the water may be bitter or it may take on some chile flavor. If the water is bitter, discard it; if not, use it in a recipe in place of water.

Chop or make chile paste: Chop the chiles into small pieces and add them as desired. Traditionally a stone mortar was used to crush the chiles but today a blender is an easy alternative. (A food processor will do, but may not get it as smooth). Add a bit of water, some olive oil, or, if the recipe calls for vinegar, that works well also. Blend the chile into a thick, smooth paste, scraping the edge of the blender frequently.

Whether you use them as a paste or just chopped into pieces, added to salsas, sauces, soups and even pasta water, dried chiles infuse flavor into whatever you are preparing. The paste made from dried chiles can be kept in the refrigerator for several days and some make an excellent rub for meat. They offer a rich, smoky flavor and a nice bit of heat. Use sparingly at first and build toward the heat level that suits you best.