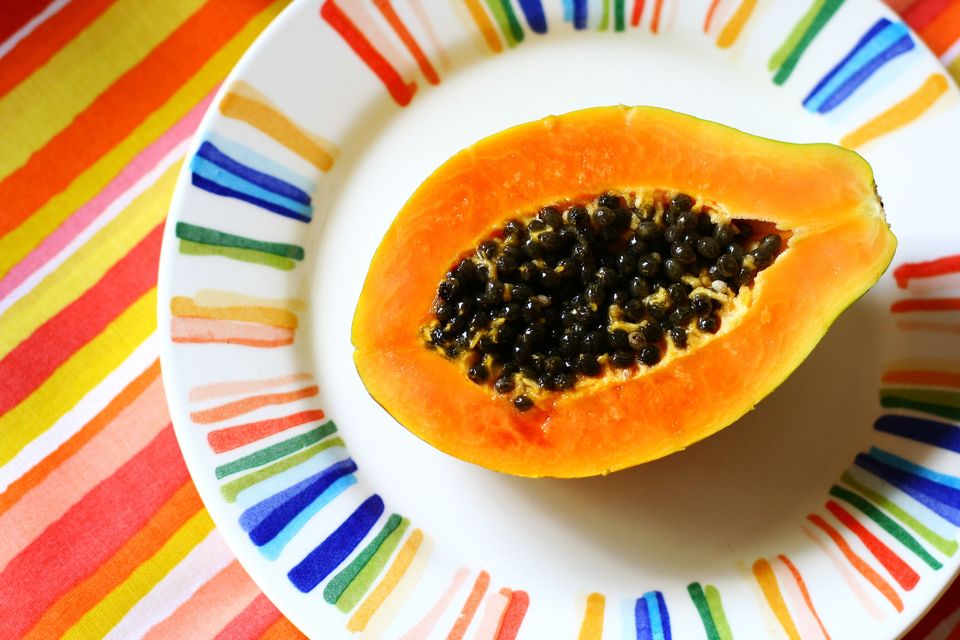 Papaya (Carica papaya) is native to southern Mexico and Central America and has become naturalized throughout the Caribbean Islands, Florida and several countries in Africa. It is also cultivated in India, Australia, Malaysia, Indonesia, Philippines, and the U.S. state of Hawaii. The Maradol variety of papaya was developed in Cuba between 1938 and 1956 by self-taught breeder Adolfo Rodríguez Rivera and his wife María Luisa Nodal Ochoa. The name of the cultivar resulted from joining parts of the names of its creators—“Mar,” from María, and “adol,” from Adolfo. The Maradol is grown in many states in Mexico, including Baja California, Campeche, Chiapas, Colima, Guerrero, Jalisco, Nayarit, Michoacán, Puebla, San Luis Potosí, Tabasco, Tamaulipas, Veracruz, and throughout the Yucatán.

Costeños will confirm that papaya’s origins are southern Mexico. If anyone has read Leondardo da Jandra’s books about the coast (with a lot of history revolving around the establishment of the Parque Nacional) papayeros (those who cultivate papaya) are part of his cast of characters. The wild papaya on the coast, which occurs in the coastal forests, is called papaya silvestre or papaya raton by the locals.

Depending on what reference you read, Oaxaca ranks either first or third in the national production of Maradol papaya. The Non-Governmental organization, the Papaya Oaxaca Product System Committee, maintains it is #1. Regardless, the coast of Oaxaca has been both a major producer and exporter of papaya for many years. Production is around 180,000 tons and is essential to the local economy, including not just production but transport and commercialization.

The main production areas in the state are the Coast (80%), followed by the Isthmus and the Cañada de Cuicatlán, a hot low canyon that links the Valley of Oaxaca to the southeast with the Valley of Tehuacán in Puebla state to the northwest. All papaya production is irrigated. Large in-country destination markets are the Central de Abastos in Mexico City, Puebla, Monterrey, Toluca and Baja California. Country-wide, five million tons are exported through various middlemen.

Papayas are male, female, and hermaphroditic (both sexes), so until the plants flower it is impossible to tell whether it will yield fruit. The hermaphrodite has both male and female flowers and therefore can self-pollinate. They start producing fruit after about six to eight months and quit producing fruit at a commercial level between two and four years.

Nutritional characteristics of papaya are well known. It is particularly high in Vitamin A and C, as well as being a source of antioxidants such as carotenes, vitamin C and flavonoids. Papayas contain the B vitamins folate and pantothenic acid; the minerals potassium, copper, and magnesium, and fiber. It contains the enzyme, papain recommended as a therapeutic for gastric problems, and as meat tenderizer, beer clarifier and cosmetic disinfectant.

My research indicates that organic papaya is produced in only two places in Mexico: Colima, and just recently here in Bajos de Coyula. Colima exports to New York City. Organic production methodologies of course vary greatly from region to region, as a function of type of crop, soil, weather, availability of nutrients and their processing, and local and non-local markets, etc.

Possessing a very soft skin, papaya is prone to numerous diseases, such as viruses and fungi, and insect damage, particularly from white flies and spider mites, which both suck the juice from the fruit. So organic production is difficult, labor intensive, and takes constant scrutiny. My husband and I had the pleasure of visiting the farm in Coyula a few weeks back: impressive! Their methods are not that unusual, given how composting is done here on the coast with local materials (take a workshop with Norma Pérez). I won’t go into details here but almost all the materials used in composting are locally collected, including cow bones, cow dung, shrimp exoskeletons, and coffee shells (source of silicon).

So what is the difference between organic and organic certification in Mexico? The certification process! Anyone can grow and sell crops without chemical fertilizers or pesticides for self consumption or sell at the organic market, but they are not certified and don’t necessarily need to be. There are a number of private certifying organizations such as Mayacert, Certimex, and PrimusLabs (pesticide residue analysis). The final word, though, comes through the federal government agency SAGARPA (Secretaría de Agricultura, Ganadería, Desarrollo Rural, Pesca, y Alimentación, or Secretariat of Agriculture, Animal Husbandry, Rural Development, Fisheries, and Food).