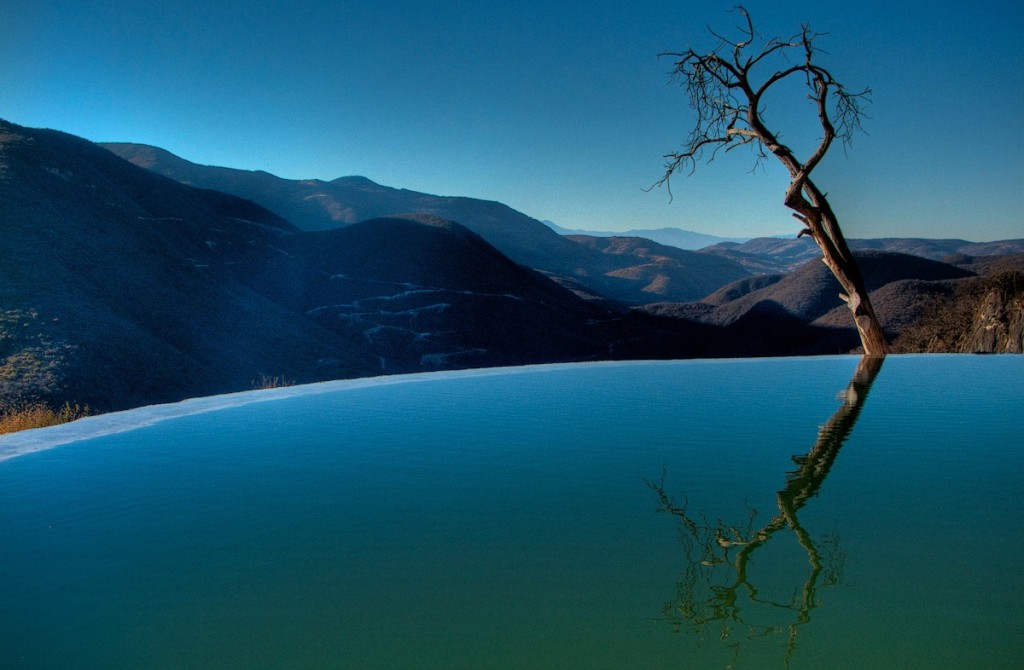 In Peter Greenberg’s recently aired The Royal Tour, President Calderón selected diving in the cenotes of Yucatan instead of a refreshing swim at Hierve el Agua.  Nevertheless, Oaxaca’s bubbling springs and petrified waterfalls are one of the most spectacular attractions in all Mexico, of course with all due respect to Mr. President.

Hierve el Agua is one of the least visited stops (not only by heads of state) along the state of Oaxaca’s central valley routes.  Yet for naturalists, photographers, hikers and those with interest in ecotourism, it holds much more allure than the traditional sights. And for those vacationing in Huatulco who are reluctant to be beached for even a day, Hierve el Agua scratches the itch.

What is Hierve el Agua

Translated “the water boils,” Hierve el Agua is actually a misnomer.  At two locations about 40 meters apart, water does indeed “boil” up from the ground, but not hot; rather it’s forced to the surface by the earth’s interior pressure, arriving at roughly atmospheric temperature.

It rises to the surface, then channels into two pools of fresh, mineral-rich water, suitable for swimming; the pools gradually reach depths of upwards of seven feet. Taste the water before it reaches the lower pool as it flows along a narrow canal from the puncture in the earth.  It’s crystal clear and pure, of course aside from natural mineral compounds. 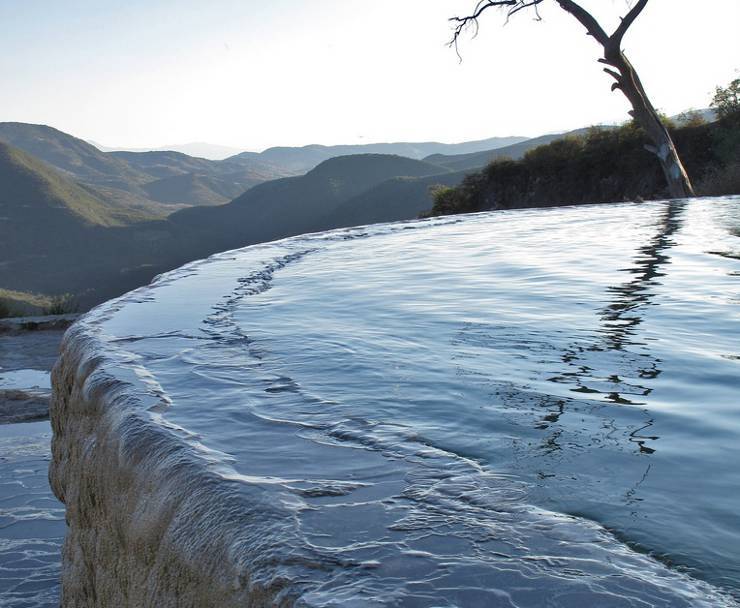 The Effect of Minerals at Hierve el Agua

The bubbling water is rich in mainly calcium carbonate and magnesium.  The minerals have built up over thousands of years, giving the visual effect of petrified waterfalls.  Approaching the actual site to swim or view the falls, one gingerly walks over these deposits.

Standing on the main precipice near the lower pool, one sees the postcard perfect petrified waterfalls, a photograph often reproduced for promoting tourism to the state.  However, there are different falls which can be viewed in the course of hiking.

At Hierve el Agua there are numerous trails and pathways suitable for short hikes. Each route is less than an hour in duration including stops to take pictures and marvel.

Depending on the time of year, some paths may be overgrown, but certainly not to the extent that there is any undue danger or risk of getting lost.  The most well-traveled leads up and around to the top of the principal falls.  One often sees people who have already made it there, sitting and gazing back towards the pools, while having a vantage-point for viewing additional, equally impressive natural formations.

Another pathway requires more navigational agility.  It leads down into the valley along a series of ridges and paths.  One arrives at the base of the principal falls, from where one can do a bit of climbing.  But pause and look back every once in a while, and see the effect caused by the water cascading over the course of millennia. 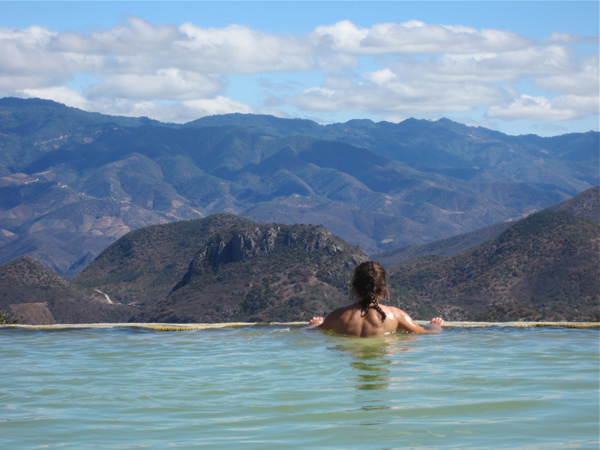 In 2008, the government completed construction of new lodging and dining facilities, including a large, almost Olympic sized swimming pool.  However it is not known when any of it will open.  There will be about a dozen small restaurants and an equal number of hotel suites.

In the interim, several palapa-style simple eateries line the access route to the site, beside the parking area.  Souvenirs and sometimes mezcal are sold in the same area. There are basic washroom facilities and rudimentary change rooms nearby.

A larger restaurant, Alice’s, is located on the left side of the road, before reaching the gate where the official entrance fee is paid. Arrangements can be made at the restaurant for staying at one of the Tourist Yuú overnight lodgings.  There are four cabins which provide adequate accommodations for an overnight stay. Inquire at Alice’s for details or book by calling a cellular phone, either 045951106356 or 044951106356. The village where Hierve el Agua is located, San Isidro Roaguía, has a few small stores, a school, a health clinic and a police detachment. 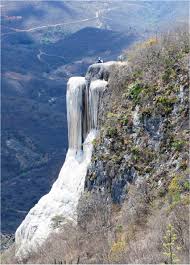 Though not officially open, the new highway which will ultimately cut driving time from Oaxaca to Huatulco can usually be used to access Hierve el Agua from just beyond Mitla to San Lorenzo Albarradas. It’s best to not use it during rainy season. The more scenic and secure route is along Highway 190, passing by four quaint roadside mezcal palenques including El Tigre, a combined comedor and mezcal factory about a half kilometer before the San Lorenzo turnoff.

Over the past few years there has been a peaceful dispute between the residents of San Lorenzo and San Isidro, as a result of which at times a 10 peso toll is exacted at San Lorenzo so as to enable tourists to continue on to Hierve el Agua.  It can be avoided by taking a less traveled, more circuitous mountain route through the village of Xaagá. This mountain pass, however, should similarly be avoided during rainy season.

At Mitla there is a taxi service to Hierve el Agua. For a more pleasant drive it’s best to use a tour company out of Oaxaca, or a private driver or guide for even greater comfort and a more personalized experience.

Alvin Starkman and his wife Arlene operate Casa Machaya Oaxaca Bed & Breakfast (http://www.oaxacadream.com).  Alvin sometimes takes guests to Hierve el Agua and other sights along Oaxaca’s touring routes. He can be reached at [email protected].  Alvin is also a guest writer for the Huatulco Eye.