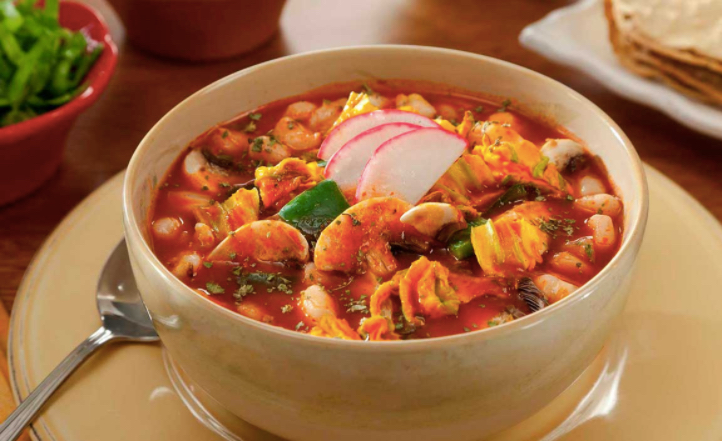 Mexican soup, to folks north of the border, usually means tortilla soup, or as it is usually called in Mexico, sopa Azteca. Usually made from a rich chicken soup with pureed tomatoes and garnished with avocado and cheese cubes, cilantro, diced onions, and, of course, crisp fried tortilla strips, the exact flavors vary from cook to cook. Although it is a favorite throughout Mexico, the varieties of other soups are virtually infinite and vary from region to region and season to season.

On menus, you will find up to three classes of soups: sopas, cremas and caldos. Sopas are usually chunky in nature with pieces of vegetables, potatoes or pasta, meats or meatballs, or fish or seafood adding a toothsome crunch. A small garnish of cheese or cream may top the bowl. Our favorite sopa on the beach in Huatulco is sopa de pescado, fish soup. Commonly, large chunks of fish or a whole small fish are served in a simmering tomato/vegetable based broth. As the fish falls apart when eaten, the broth becomes richer and richer. Consuming the soup can take close to hour to enjoy every drop and morsel, leaving nothing but bones in the bottom of the dish. 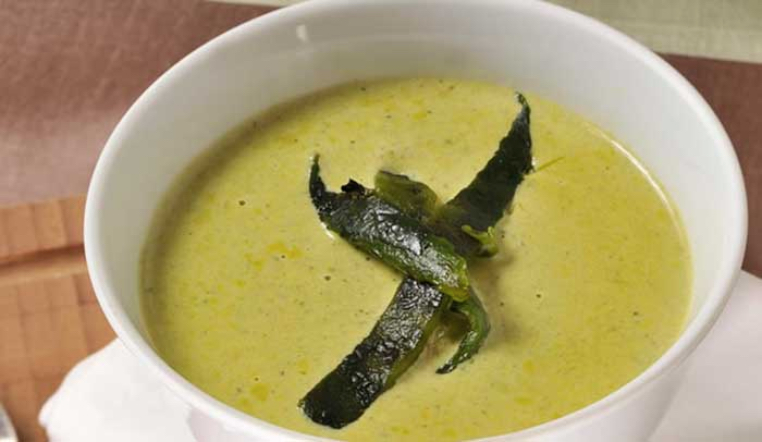 Cremas typically consist of cooked or fresh peeled pureed vegetables or fruits, many but not all thinned with milk, and often garnished with a sprinkle of herbs to add visual appeal. In Mexico City when the weather turns cold, we prefer the hot and somewhat spicy cremas, especially those that combine root vegetables, leeks and peppers into a smooth complex of tastes. But during the hot season, cold cremas made from avocados or cucumbers can be a most refreshing start to a meal. To confuse matters, in the dairy section of supermarkets you will find crema, a variant on sour cream that is thinner, saltier and even more sour. It is not a soup, nor typically an ingredient of soup.

Caldos are rich broths made from chicken, meat, or fish; they can be used as a base for sopas and cremas, served unadorned, or served with cooked pasta floating in the bowl. The globally ubiquitous chicken soup is a dish that has made the reputation of cooks both at home and in restaurants. There is no shortcut to the best chicken caldo. Freshly slaughtered plump chicken, and the sweetest of carrots, celery, and onions, plus fresh herbs selected according to the cook’s preference, need to be slowly simmered until the meat falls off the bones of the chicken. The caldo, once strained, is best left refrigerated overnight, so the fat that congeals on the top can be removed. Once reheated, the soup is wonderful if you are feeling fine; but if you are feeling a little under the weather, chicken soup can feel like manna from heaven.

Whether caldo, crema or sopa, the secret to the best aromatic, sensually delicious soups are the very freshest locally-grown ingredients. Although there are some shortcuts that lazy cooks use such as caldo cubes or canned vegetables, the best soups require recently picked vegetables or fruits, herbs that are locally grown and harvested, and for the base, caldos that have been simmered for hours until the last bit of “juice” has been extracted from fish, chicken, or meat – including the bones.

If you are hankering for a great soup in a restaurant, do not order “sopes”. Sopes are not soup but a breed apart. Consisting of a masa/cornmeal base made essentially from the same dough as for tortillas and filled with refried beans, cheese or other ingredients, sopes can be a nice appetizer or snack.

Another menu anomaly throughout Mexico is the inclusion in the soup section of the dish called sopa seca de fideo or dried noodle soup. Noodles it is and often a delicious mound of room-temperature soft angel hair in an intriguing sauce, garnished with fresh cheese and avocado. But it is definitely dry, and any broth used in making the dish disappears long before it is placed on the table. On menus in Mexico will you find chili which is served in Tex-Mex restaurants in the US as an alternative to soup? No.

So, if you’d like to start your meal with a yummy, liquid dish eaten with a spoon, by all means try a sopa, crema or caldo, and leave the sopes and sopa seca de fideo for another meal. 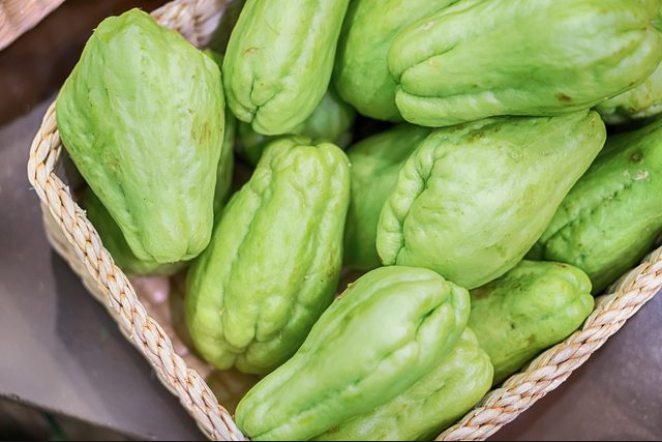 In a large soup pot over low heat, fry the bacon until almost all the fat is rendered, or melt the butter. Raise the heat to medium, add the onion, salt and pepper and cook, stirring occasionally, until soft, about 5 minutes. Add the stock or water, bay leaves and potato and simmer until the potato slices are soft, about 20 minutes.

When the potato slices are soft, remove and discard the bay leaves and bacon (if used). Add the chayotes and bring to a boil. Return the heat to medium and simmer, uncovered, until the chayotes are soft, about 15 minutes. Remove from the heat and let cool slightly. Working in batches, puree the soup in a blender until smooth. As each batch is pureed, pour the puree through a sieve placed over a bowl, pressing with the back of a spoon to extract all the juices. Pour the puree back into the pot, add the cream or half-and-half and bring just to a boil. Taste and adjust the seasonings.

Remove from the heat and ladle into warmed bowls. Slip a few lime slices into each bowl and serve hot.