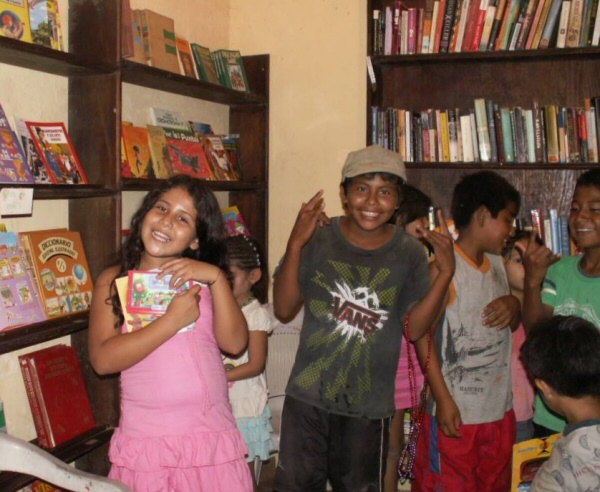 Four thousand books from which to choose—in English, Spanish, French, Italian, Japanese, and Dutch. Books for children in Spanish, French, and English. Make your selections at the Biblioteca de San Agustinillo in the quiet pueblo of the same name (population 250), snuggled between the hip beach of Mazunte and the night life of Zipolite on the Oaxacan coast.

But December 15, 2011, was anything but a typical day. The entire town and its visitors were invited to the biblioteca to celebrate her 10th anniversary.  On that very day in 2001 the four gringa founders, along with town and municipal officials, opened the doors of the Casa Municipal for the inauguration of the new library. And ever since, the library has been growing and changing, thanks to the generosity of people who love libraries and education.

When the library first opened, some cynics said the concept of a lending library wouldn’t work in this tiny town. The tenth anniversary happily proved them wrong.  Local residents are immensely proud that their little town houses one of the best libraries in the area.  As one tourist said, “I was going to move on to different beaches until I realized that I have it all here: a beautiful, peaceful beach; fresh fish; and access to the best books in the world. Why would I leave?”

Open to everyone, at no charge  The sole cost of admission to the library is a desire to read and the only requirement is to return books when you’re finished with them. Little wonder people flock to the biblioteca, with its ample selection of best sellers, fine literature, classics, history, encyclopedias, as well as books on self improvement, spirituality, sports, travel, and language.

24-hour service  Just outside the library in the hallway are surplus books to purchase and magazines to share. Take the magazines, pass them on to others, and leave 10 pesos for every book you choose to carry with you. This area is open even when the library is closed. One goal of the library is to be sure everyone who wants a book has one, no matter the time, day or night. 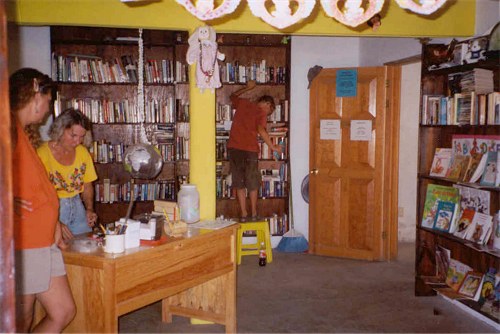 Where does this little library get all its fabulous books?  This is a common question because of the fine selection. The library is run totally by donations. Tourists leave and send their books to the library. People who live in the area also donate their books. Case in point: the shelves of French books are courtesy of the donations of Julien Pardinilla, owner of Un Sueño cabañas and Un Secreto restaurant, and his French clientele.

Cash donations allow the library to buy books and supplies for the children’s workshops, as well as to build bookshelves, pay the light bill, and other practical concerns. Without these donations, the library wouldn’t survive.

More than a biblioteca, a gathering place  The library and its volunteers not only provide travel and reading suggestions for tourists, but also a place to just come and chat.  Tourists from around the globe stop in to talk about books…sometimes with interesting results. Permanent residents Melissa and James Arnott actually met because of the library.  James arrived first as a short-term visitor.  But when he discovered the broad selection of reading material he decided to stay for a while, just in time for Melissa’s arrival. The rest is history: they married and to this day Melissa gives the credit to the biblioteca! Although the library doesn’t claim to be a matchmaking endeavor, people with similar interests do gather in the outdoor reading and arts-and-crafts area to exchange ideas, travel stories, and often just to laugh.

Children’s art contest…and a mystery  One of the most successful library ventures has been the its participation in the national art contest El Nino y La Mar.  Children 6 to 12 from all over the country participate in this prestigious competition each year, the theme of which is “child and the sea,” with an emphasis on ecology.  The library sets aside two days each year for a workshop, inviting local children to come and make their paintings.  All supplies are provided: paints, brushes, paper, and assistance from volunteers. The paintings are then sent to Oaxaca City for judging.  Each state in the country designates its first, second, and third-place winners as well as honorable mentions.

In Oaxaca alone, more than 1,000 paintings are submitted every year. And in the library’s first year of participation, 2003, Javier Mendez Olivera won third place.  Shock and excitement filled the town. Remarkably, every year since then the town has had a winner. In 2009 and 2011, two of the town’s young girls took first place.  Other years, there have been second and third-place winners. The prizes are considerable.  First-place winners are awarded a week’s tour (with accompanying parent) to Mexico City, Puerto Vallarta, and Veracruz.  Second and third-place winners receive a bicycle and a mountain of books, paints, and other materials.  It’s something of a mystery: How can this little town produce a winner every year?  A citizen of Oaxaca City once commented, “Your children live the sea every day, and their paintings reflect their passion for the environment.”

More library offerings  Over the years, the biblioteca has provided cultural activities including art workshops, a music program, participation in chess classes and tournaments, and English classes. Tourists who frequent the area often volunteer in their area of expertise. Just this year, DeNel Rehberg Sedo started a reading program for the younger set.

A bright future  The new Representante Municipal of the town, Argeo Velasquez, has big plans for improvements in the Casa Municipal, where the library is housed, including more square footage for the library and, eventually, its own location on a second story. The goal is to make the Casa Municipal a center for cultural activities. 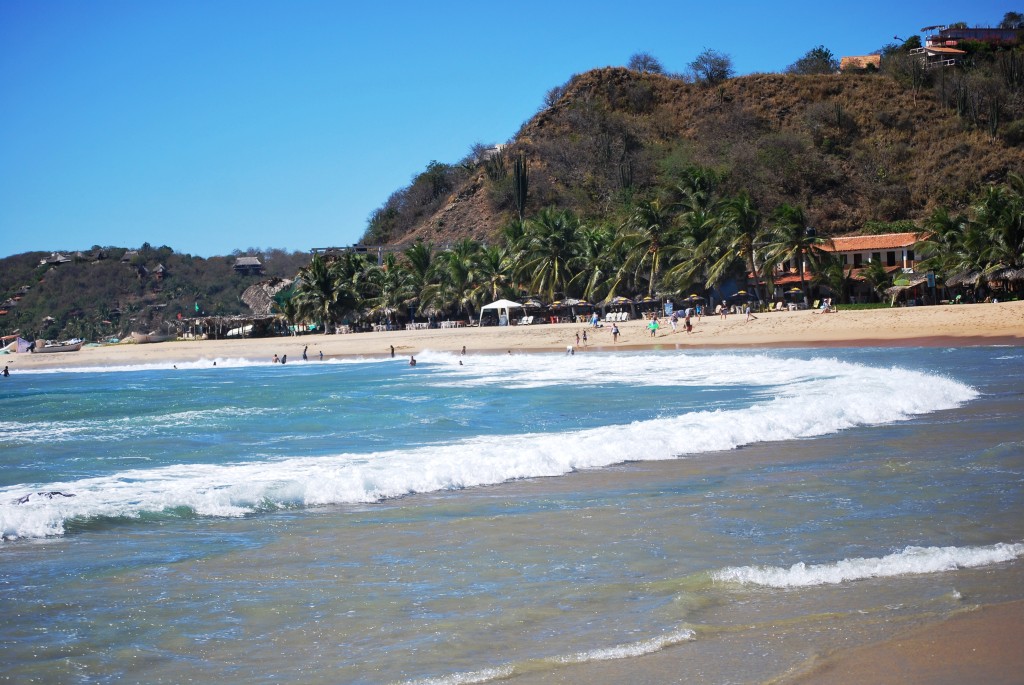 On your next visit to the Oaxacan coast, stop in at the Biblioteca de San Agustinillo to experience first-hand this little paradise for readers.  Take out a book and relax in one of the peaceful restaurants on the water (the entire town hugs the beach) or spend an afternoon browsing and talking about books and travel. What could be more fun?

Library hours are Monday, Wednesday, and Friday, 2 to 5 pm.

Author Carole Reedy, writer for the Huatulco Eye is one of the founders of the biblioteca. She lived in San Agustinillo for ten years before relocating to México City. She is happy to answer any questions you may have about either location.  Carolina_reedy@yahoo.com.