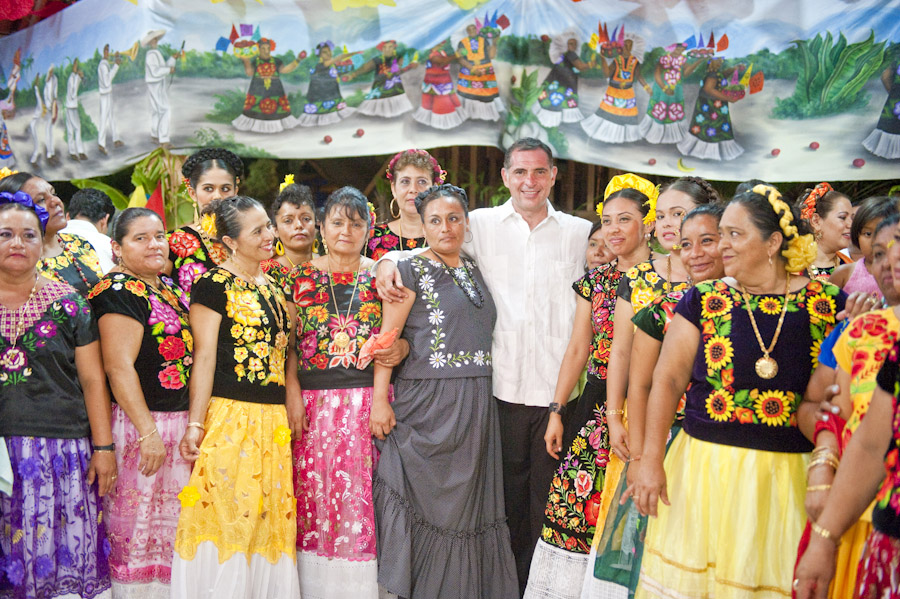 I had the honor of being invited to an Isthmus wedding last year. The groom, Asa Buchanan, was a young English teacher from London and the bride Karina Nuricumbo´s family was from Juchitán. It was an enormous, colorful affair held in an event hall right near the highway leaving the city.

Almost all the women were dressed in extravagant outfits, bursting with multihued flowers usually on black velvet. These embroidered costumes are an integral part of this culture – and no time better to show them off than a wedding!

A little history helps explain why. Before the Panama Canal in 1914, the Isthmujs of Tehuantepec was the narrowest strip of land between the Pacific Ocean, where Spain had colonies in the Philippines, and the Gulf coast up to Veracruz and then on to Europe.  Juchitan , was on the  transportation route for moving exotic goods, so there were many outside influences on the women’s clothing.

The women were exposed to the brilliantly floral silk shawls from China. Then came the sewing machines in the late 1890s and production of these eye-catching gowns soared. Soon the Tehuanas/Juchitecas style was the rage all over the country, first due to Frida Kahlo´s fascination and later the entire country´s. 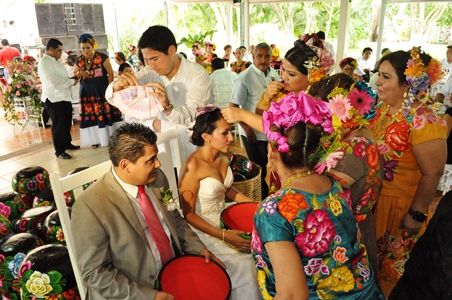 Another interesting tradition in a Juchitan wedding is the ritual of the Mediu Xhiga.  Mediu comes from the value of the former currency called a real, equivalent to about six cents. Xhig is the Zapotec word to define cup, which originally was made of the hard outer part of  fruit so called jicalpestre.

Traditionally during the celebration of the nuptials, the mediu xhiga song was played and guests are invited to deposit money in the groom´s jicalpestre (nowadays a tin can will do). In exchange the guests received a ceramic vase called a cantarito.  During the dance, couples try to break each others´ pitchers. At the end of the song, guests break the pitchers, throwing them to the floor. However, these days many guests keep them as a memory of the wedding. I kept mine. It was just too beautiful to break.

Another tradition originates in colonial times as a means of protecting the local Zapotec women from the randy, roaming Spanish soldiers. It is called The Rapture. The young man abducts his future wife and brings her home to mom and dad until the day of the wedding. He goes to her parents to get their consent and at that point she may or may not be sent back home depending on what her parents decide. If it is a go, the future groom then sets out to ascertain the status of the young lady´s honor.

Although this tradition may be considered somewhat rural and rustic now, and perhaps only symbolic these days, my Istmeño students tell me they can still occasionally witness  young men  roaming  the streets and shouting the news of his future nuptials. Ironically, even thought the young lady´s virginity is considered a plus in a new marriage, a non-virgin verdict does not mean by any means that the wedding is off.  And you can bet she will be lovely on her special day with her gorgeous white huipil, elaborate headdress and golden jewelry!

By Caryl Delaney – writer for The Eye Magazine, Huatulco