Fonatur: The Birth of Huatulco

Visitors to Huatulco cannot help but notice prominent signs displaying the name FONATUR and many ask what they mean. The name is an acronym that loosely translated signifies “National Tourism Development Fund”. This government fund was established in 1974 with a mandate for the planning, construction and maintenance of sustainable well-designed tourism centers throughout the country. Some of their projects include Cancun, Ixtapa and Cabo San Lucas. Huatulco, however is unique; it is an eco-friendly resort with an amazing amount of permanent green space, including a National Park.

Flying over this coast in 1969, a search team was seduced by the magnificence of the nine virgin bays stretching along 35 km. It was not until 1977 however, that rigorous studies were initiated to determine the viability of a potential tourist project. A green light was finally issued in 1985 to begin construction on the master plan. Prior to this, there was virtually no infrastructure in the region: no paved roads, no running water or sewage system and no electricity. FONATUR has invested about six hundred million dollars, so that we can all enjoy the sun, the sand and the tranquil beauty of Huatulco.

Effect on the Original Inhabitants

Before this region was developed there were about 200 families living along the nine bays. As with anything political, expropriating land and displacing families in favor of development is controversial. Life for the original inhabitants has certainly changed with the advent of a tourist destination and some would say this is the normal cycle of “progress”. Others would disagree. 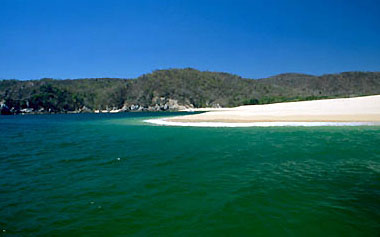 Doña Polo and her husband Francisco Rios Ramirez were a young married couple living in Santa Cruz when FONATUR came to the region. In 1986, as compensation for the expropriation of their home, they were given a lot on Calle Carrizal, another lot in Sector I, plus an allowance of 40,000 pesos for construction. Polo and Francisco understood the opportunities that were being offered and opened a seafood restaurant on their property on Calle Carrizal.

Over the years “El Grillo Marinero” has become a successful enterprise involving all three of their children. Doña Polo and Francisco Jr. do the cooking; Francisco Sr. and Gabriel continue to fish while Reyna helps to run the business. This simple palapa covered restaurant has been featured for its “Sopa de Mariscos” (seafood soup) and “Pulpo en Tinta” (octopus in ink) by the International TV network “Travel and Living” and by the glossy national magazine “Desconocido”. Their success is no accident; they work hard and while the parents never had the opportunity to attend school, all three of their children are University graduates. Franciso Jr. and Reyna studied Tourism Administration while Gabriel took his degree in Marine Sciences.

When asked if the changes were positive to their lives they agreed emphatically that they were. They went on to say that not everyone did as well as they have. Many people did not understand the value of what they were receiving and sold at a low price before the development was underway. In any society there are those with a vision and those without. Among those without, many would have preferred to keep their simple life, untouched by the outside world.

Compared to Canada and the United States, Mexico is a poor country and Oaxaca is among its poorest states. Subsistence farming on small plots of poor land can no longer support many rural families and Mexico must look to other means to allow its growing population to survive. The development in Huatulco was initiated for this purpose.

“The Bays of Huatulco” has grown from a scattering of 200 families to a vibrant town of about 18,000. FONATUR employs about 500 people within their construction and maintenance divisions. This is in addition to the many jobs that have been created by the tourist industry such as hotels, retail stores, restaurants and tour operators. As the town grew many professionals have chosen to live here; lawyers, doctors, nurses, accountants, architects and teachers. All of these people, plus those who have built vacation or retirement homes, have created employment for construction workers. Creating these jobs was the purpose of developing Huatulco. 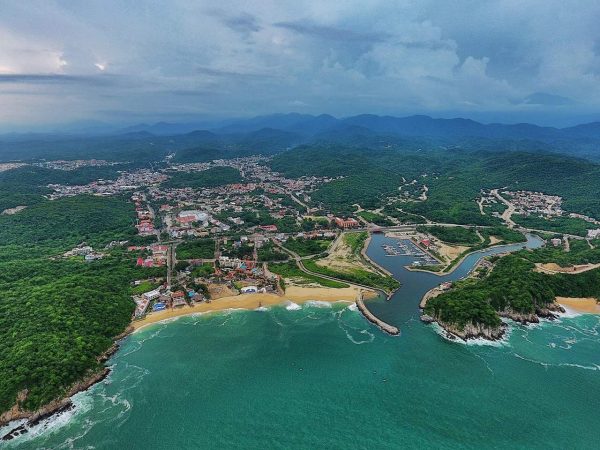 There are currently about 123 hotels of various levels from very basic to luxury. The government has paved over 132,000 sq meters of roads. They have installed eight wells, five sewage treatment plants and run more than 220 Km of power lines. It is easy for those of us who live here to forget that we are in a developping country since the infrastructure is comparable to many first world towns. No matter if we are here for a few days of “sun and sand” or have chosen to make this our permanent home, we are all attracted by the perfect combination of ideal climate, majestic natural beauty and well developed infrastructure.

Many visitors express doubts about the viability of purchasing property in Mexico and this skepticism is not unfounded. Mexican land titles can be complicated and countless scams have been committed. While searching the coast for property we were offered some incredibly tempting bargains but research inevitably proved them to be quite the opposite.

For those wishing to invest, a major advantage of Huatulco aside from the infrastructure is the “clean title”. FONATUR is the rightful owner of the land that it sells; therefore the legal certainty of land acquisition is 100% secure. Property within Huatulco may be more expensive but you get what you pay for!

Growth in any community is a double edge sword. When we arrived in Huatulco in 1999, if you spotted a bottle of teriyaki sauce at “Abbarotes Santa Cruz”, you grabbed it because you may not see another one for several weeks. Now at “Super Che” there is an entire oriental food section. The same is true for the diversity of restaurants the town has to offer.

Aside from the existing infrastructure, FONATUR continues to make Huatulco a wonderful place to live and to invest by maintaining it. After a heavy season of rain, several roads and highways suffer from potholes but BMO (the maintenance division of FONATUR) endeavors to keep them repaired. BMO provides garbage pick up three times a week and the same people keep the parks and palm lined boulevards well groomed and the streets lit at night. Part of the master plan included an extensive system of culverts so that the town does not flood even after a heavy storm and BMO maintains a unique sewage treatment facility that recycles waste water into parks and boulevards. This system of waste water management allows our lovely pristine bays to remain that way.

FONATUR is here for the purpose of developing land and selling both commercial and residential property in order to promote tourism. Both residents and visitors benefit from the work that they do. While it may at times be frustrating that things do not happen as quickly as one would like, over all we should appreciate what has been accomplished in less than 30 years. It is their policy to continue maintaining the region until all development has been completed which means that we are likely to continue benefiting for another 30 years.