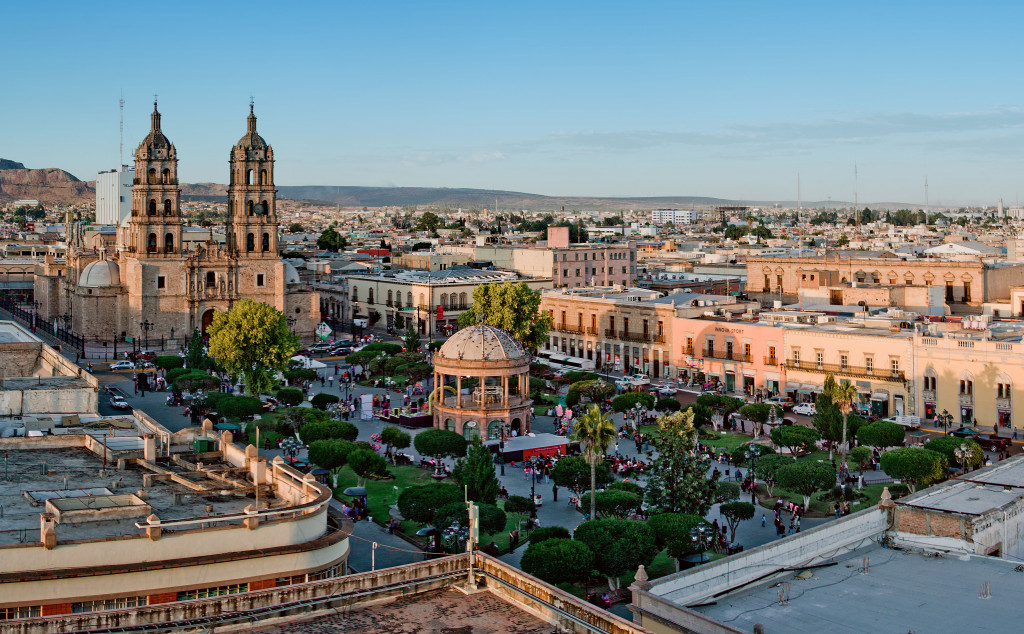 “Grandest, largest, biggest, oldest, most beautiful” are all adjectives that have been used to describe the architecture in El Centro Histórico, Mexico City.

A UNESCO World Heritage Site, El Centro Histórico comprises 700 blocks wrapped around the 13-acre zócalo, the heart of the city and one of the biggest squares in the world–second only to Red Square in Moscow.  In 1325, the Aztecs built their Venice-like city, Tenochtitlan, on this site, at the time an island in Lake Texcoco.

The Aztecs and Spanish

Surrounding the Zócalo (La Plaza de la Constitución) are buildings that represent multiple styles of architecture, from Classical, Baroque, and Churrigueresque to Neoclassical. The Metropolitan Cathedral, which took almost three centuries to complete (1525 to 1813), takes in all these styles.  The largest church in Latin America, its towers rise over the Zócalo. Inside you’ll find five altars and a steady stream of activity. There’s always something going on: baptisms, weddings, confirmations, and daily services.

Take a tour of the main organ area (though there’s no real schedule, as with so many things in México) and climb the bell tower…if you have strong legs and aren’t claustrophobic. As you stroll the Zócalo be sure to take a good look at the church from a distance to see an effect similar to the Leaning Tower of Pisa’s. Many buildings in centro appear to be “blowing in the wind.”  Remember, this city is built on sand and water.

The National Palace, on the former site of the Palace of the Aztec Emperor Moctézuma and later the home of Hernán Cortes, occupies the entire east side of the El Centro Histórico and the Zócalo.  The National Palace has been the seat of power since the Aztecs and until recently was home to the viceroys and presidents of Mexico. The building itself represents a blend of the Spanish and the Aztec, for although the old structures of the Aztecs were torn down, their materials were used in constructing the new building.

From a balcony of the National Palace, the President de la Republica gives the grito every 15th of September at 11 pm.  The grito is literally the shout of Independence against the Spanish that Father Hildago gave on that same date in 1810.

For many tourists, the principle reason to visit the National Palace is to view the murals, painted by Diego Rivera and depicting the history of México from the Aztecs through the Mexican Revolution.  Start on the main floor, from which the mural sweeps to the ceiling, and take the steps to the second floor, but don’t strain your neck looking at this magnificent depiction of Mexican life over the centuries.

Photo ID is required to enter the National Palace since it is a place where government business is still conducted. Hours are sporadic, and it’s not always open to tourists (especially if the President is in residence). 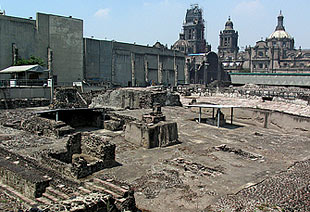 Kitty corner behind the cathedral you’ll find the Templo Mayor, the Great Pyramid where the Aztecs lived and sacrificed thousands of human lives.  After the Spanish destroyed this sacred Aztec site, they built their own churches and buildings on top of the rubble.  But in 1978 workers laying cables discovered the ruins of the Aztec temple,   prompting an excavation of the area and the discovery of the Templo Mayor. Just imagine what lies below the surrounding buildings!

You can visit the site of ongoing renovations and the attached museum, in which the treasures of the Aztecs are beautifully and tastefully displayed. Between the Templo Mayor and the cathedral vendors sell items representing many aspects of this diverse country: shamans will give you a limpia (cleansing) for 10 dollars;  Zapatistas collect donations for the cause in Chiapas; Huichols from the north offer their intricate beadwork; book vendors sell dictionaries, datebooks, coloring books, small self-help paperbacks, and calendars; and, as in all corners of the city, you’ll find food vendors with their blue corn tortillas and other purely Méxican delights, as well as the ever-present Chiclets and amaranth seed cakes.

After your visit to the zócalo, stroll down the pedestrian street Madero, named for Francisco I. Madero, a key political figure who was assassinated in the Revolution of 1910.  You’ll pass McDonald’s, Burger King, and Gandhi bookstore before arriving at the House of Tiles, home now to one of the chain of popular Sanborn’s stores. In the sixteenth century, this was the Palace of the Countess of Orizaba, which she remodeled in 1737 with the expensive blue and white tiles of Puebla you’ll see covering the façade of the building.  Inside, look for José Clemente Orozco’s mural Omnisciencia.

During the French occupation in the 1860s, Emperor Maximilian I brought new design ideas to the city. He built the elegant boulevard Paseo de la Reforma between his home in Chapultapec Castle and the National Palace.

In 1877, during the first years of his 30-year reign, President Porfirio Díaz called for classical designers to build along the avenue statues of political figures of the country’s history, as well as the Ángel de Independencia and monuments to Aztec Emperor Cuaúhtemoc, President Benito Júarez, and Christopher Columbus.  Diaz’s vision was of a modern European city, and for that reason the most important of the commissions for structures were given to foreigners, evident in the many French-style buildings in centro histórico. 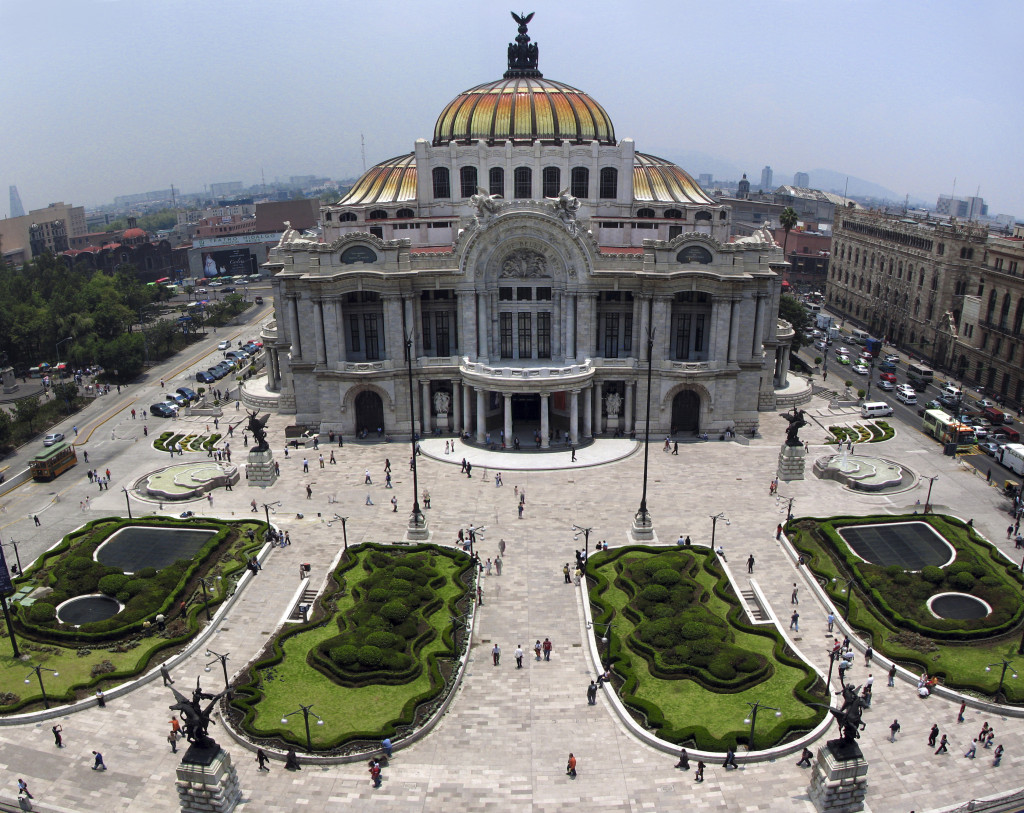 Two of the most stunning buildings–the Palacio de Bellas Artes (started in 1904, construction was interrupted by the Revolution of 1910 and the work finally finished in 1934) and the Central Post office (one block from the Bellas Artes)—

were designed by Italian architect Adamo Boari.  The architecture of both buildings is a mix of styles.

One of the best ways to view the architecture of El Centro Histórico is on the TRANVIA, a bright yellow trolley located in front of the Bellas Artes. The 45-minute tour in Spanish is sprinkled with worthy facts about the area. To view the architecture of Paseo de Reforma, walk or take the Turibus, which provides a three-hour tour of the entire Centro Histórico via the red London-style double-decker bus. Stops are scattered throughout centro and you’ll have the option of getting on and off at any of them.

Just across from the Bellas Artes you’ll find what’s often referred to as the first skyscraper in El Centro Histórico, the Latin America Tower, though there were other high rises dating from 1900.  Designed by two Mexican architects in 1956, at that time the Latin America Tower’s 44 floors made it the tallest building in Latin America. To this day it’s still the best place to view the vastness México City.  In 1985 it survived the devastating earthquake that destroyed many other structures in the city.

Today on Paseo de la Reforma you’ll find many high rises, including the Torre Mayor (740 feet), a concentration of high-rise buildings praised by New York architects and serving the increasing number of people moving to the city (making for more efficient environmental living).  In Mexico City, these high rises on Paseo de la Reforma allow other areas in Centro Histórico to maintain the charm of the original structures and space for the many beautiful parks. Just recently, the Mexican Government entered into an agreement with Fundación Carlos Slim (Slim being the richest man in the world) to buy dozens of dilapidated buildings in centro for rehabilitation. All over Centro Histórico there is evidence of positive change: paving of streets and pedestrian walkways, new drainage systems, buried electric and phone lines, and new museums. 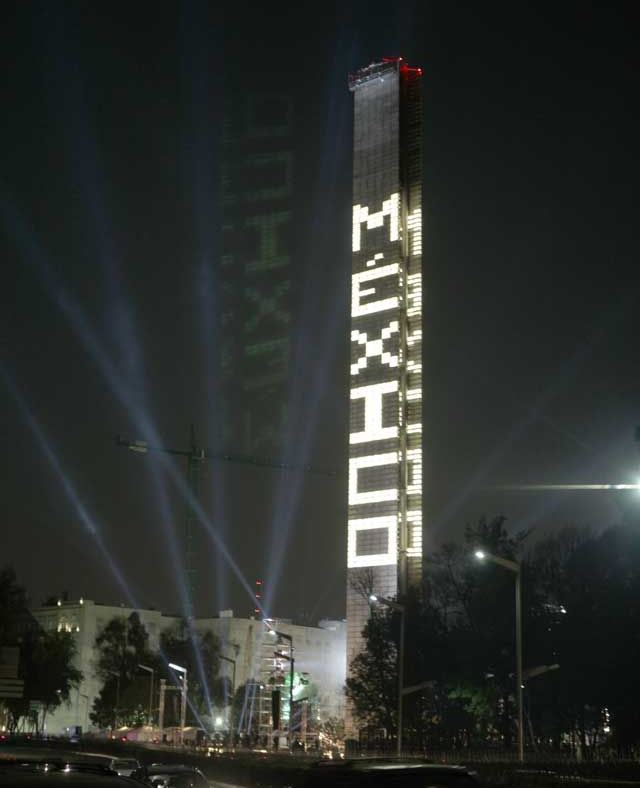 The construction of the Estela de Luz (tower of light) caused a flurry of controversy in the city. Intended as a commemorative monument for the Bicentennial celebrations in 2010, it was completed 15 months late.  Originally estimated to cost 200 million pesos (20 million dollars), it ultimately cost more than 1000 million pesos (100 million dollars) and has been cloaked in rumors of fund mismanagement.

Many citizens have criticized the tower, not only for its exorbitant cost in a country where half the citizens live in poverty, but also for its impact on the environment. It is located on Paseo de la Reforma at the beginning of Chapultepec Park, across from the Torre Mayor.

David Lida’s insightful book about his adopted city, First Stop in the New World, is subtitled “Mexico City, the Capital of the 21st Century.”  He, among others, sees a bright future for Mexico and its architecture, resiliently integrating the past and the future.