Day of the Dead Recipes: Five Dishes to Die For

Celebrated on the first and second days of November, Dia de los Muertos is one of the many vibrant festivities being observed by the people of Mexico. Because these are days celebrated extraordinarily, it was assumed that the Day of the Dead recipes prepared on these particular times are also out of the common Mexican menu. It was believed that the offering were made to make the souls happy, and what more to offer the spirits than a pile of gastronomic feast? Who knows, we, the living, might not be the only ones who enjoy a good deal of sumptuous culinary treat!

Additionally, to honor the presence of children (angelitos) and adult souls from heaven, family members put together in their humble abodes an ofrenda, a special altar decorated with multi-coloured sugar skulls of different sizes, lots of candles, and mounds of fresh picked flowers such as white and yellow marigolds (cempazuchitl) and bright red cockscomb. Sweet treats such as sugar skulls and pan de muertos (bread of the dead), special drinks, and piles of extraordinary food also envelop the shrine.

Originated from Oaxaca regions, this kind of mole is a rich, dark, and reddish-brown sauce made of onion, garlic, and several varieties of chillies, ground seeds, and a small amount of chocolate. It is served with poultry, specifically turkey.

Reminder: Be careful with handling the chillies.

In a 12″ heavy pan, heat 4 tablespoons of lard over a medium-high heat. Season chicken with salt and pepper then add it into the pan and cook until brown. Turn the heat to medium-low and continue to do this for 20 – 25 minutes. Remove chicken from heat, drain on paper towels, then set aside. Drain lard from pan but do not rinse it.

Prepare the mole while the chicken is being cooked. Mix the 2 cups boiling chicken stock over the prepared chillies in a large bowl. Leave it for about half an hour.

Pulverize the almonds using the blender. Strain the nuts and then blend it with the chilli mixture, onions, tomatoes, raisins, 2 tablespoons of sesame seeds, tortilla, garlic, cinnamon, cloves, coriander, anise seeds, and salt and pepper.  Blend until it becomes a smooth puree.

Heat 2 tablespoons of lard in a heavy 10 – inch pan over moderate heat. Put in the sauce (mole) and let it simmer for 5 minutes, stirring frequently. Pour in the cold stock and the chocolate. Over low heat, stir constantly until the chocolate has melted. Turn the heat off, cover the pan, then set aside.

Put the chicken to the pan where it was first cooked in. Pour the sauce over the chicken and make sure every piece is coated evenly. Cover the pan and simmer over low heat for another 30 minutes, basting the chicken every now and then with the mole.

Arrange the chicken on a platter and pour the sauce. Sprinkle with 2 tablespoons of sesame seeds then serve. 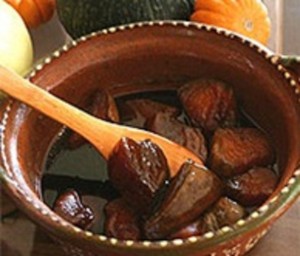 A traditional dessert prepared for the Fiestas de Muertos (Day Of The Dead celebrations) made with fresh pumpkin, cinnamon, orange juice, and piloncillo (Mexican brown sugar).

Slice the pumpkin into medium 2½” to 3″ squares or triangles. Get rid of seeds and strings. Make diamond designs over the pulp using a knife.

Place the sugar in a pan together with the cinnamon, orange juice, and water. Let it boil and stir until the sugar has dissolved. Set aside.

Put the first layer of pumpkin upside down. This will soak up as much juice as possible. Then, put the second layer of pumpkin with the pulp upwards. Cover and let it simmer. The top of the pumpkin pieces should look glazed and the pulp should turn soft and golden brown when it is done.

Pan de Muertos is probably the most famous Day of the Dead must-have. This traditional bread is sweet, soft, and is shaped like a bun. At most times, it is decorated with small bone like pieces to add life to the celebration. 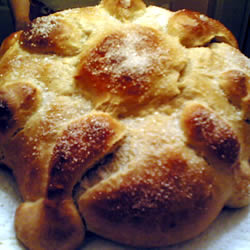 In a medium saucepan, mix and heat the milk and butter, until the latter melts. Turn of the heat and add warm water. The mixture should be around 110 degrees F (43 degrees C).

Mix 1 cup of the flour, yeast, salt, anise seed and 1/4 cup sugar. Pour in the milk mixture then add the eggs and orange zest. Beat until mixed well. Add 1/2 cup of flour and gradually do so until the dough is soft. Start kneading the dough until smooth and elastic. Do this on a surface sprinkled with flour.

Put the dough in a lightly greased bowl and cover with plastic wrap. Leave it for 1 to 2 hours in a warm place until it rises and doubles its size. Punch down the dough and form a round loaf. Shape it according to your preferences.

Place the shaped dough onto a baking sheet and loosely cover with plastic wrap. Again, let it rise in a warm environment for about another hour or until it doubles in size.

Preheat the oven to 350 degrees F (175 degrees C). Bake for about 35 to 45 minutes. Remove from the oven and let cool slightly. Brush with glaze and lastly, sprinkle white sugar on the glazed bread.

Atole is a traditional Mexican warm drink made with  masa (corn dough). It is commonly flavoured with fruits, nuts, or chocolate (champurrado). This recipe is essence with piloncillo (Mexican unrefined brown sugar), cinnamon, and vanilla bean. 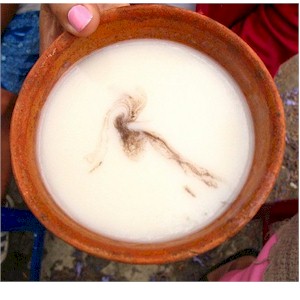 Combine the water and the masa unto a blender until smooth and put the mixture on a medium saucepan.

Scrape the vanilla bean seeds and put it into the pan.  Add the cinnamon stick and stir the mixture  until it thickens.

Add the piloncillo (or the alternative). Stir well until the sugar dissolves. Remove from the heat. Remove the cinnamon stick and the vanilla bean then serve.

Optional: Add blended fruits such as strawberries or pineapple by stirring the pureed fruit into the mixture and warming it again on a medium heat. 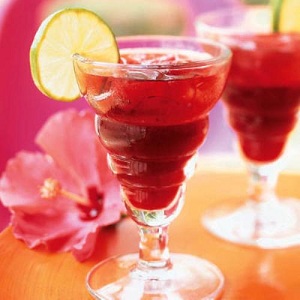 Made with jamaica flowers, this non-alcoholic drink is one famous beverage during  Dia de los Muertos.

Boil the water. Add the flowers and sugar. Stir vigorously while the mixture boils for a minute. Pour into a noncorrosive bowl and steep for 2 hours.  Strain the mixture while pressing on the flower solids to extract as much liquid as possible. Taste for strength and sweetness. Add water if too potent and sugar if too tart. Serve cold.

Note: Don’t use a bowl that will discolor as the flowers stain.

Aside from these treats, toys and sugar skulls are also being decorated around the altar to amuse the angelitos. Mezkal shots (a popular Mexican drink), lots of water, and cigars are likewise found around the shrine as an offer to the weary adult souls. It was considered that happy spirits provide their family members with their watchful protection, wisdom, and luck – an explanation that answers all the questions on why Mexican people spend so much time, effort, and money to celebrate this remarkable annual event.

Day of the Dead Recipe References:

Do you have more Day of the Dead Recipes to add?

There are so many great recipes for the Day of the Dead that we just couldn’t include them all. Hopefully you’ve been inspired to try some of these. Check the references, do some exploring, and let us know of your favourite Day of the Dead Recipes.