The Ancient Art of Purple 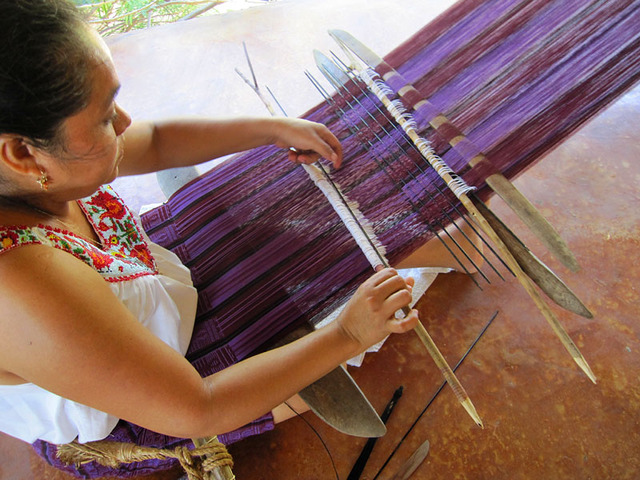 Since Ancient times, in both Europe and Mesoamerica, purple has been associated with royalty and special religious ceremonies.  As this exquisitely rich color was both rare and time consuming to achieve, collectors of purple dye were highly respected. Today only twenty five men remain on earth who are continuing the ancient tradition of collecting purple dye.  This craft has been passed down to them by their ancestors over several centuries.  These dyers travel from the remote village of Pinotepa de Don Luis to work the rocky Oaxacan shoreline north of Huatulco.

The dye comes from a species of sea snail often known as murex snails.    In Europe, murex snails were found in the Mediterranean and produced a color which was named “tyrian purple” by the Phoenicians.  Ancient civilizations mentioned this dye in texts dating back as far as 1600 B.C.   It took some 12,000 snails to extract 1.5 grams of tyrian purple dye and Aristotle reported that it had a value of up to twenty times it weight in gold.  Due to its scarcity many cultures reserved it for royalty and in more recent years the shade has been referred to as “Royal Purple”. 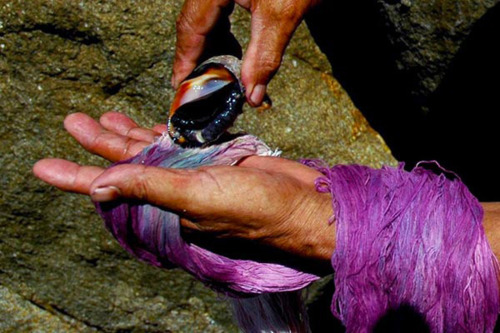 A close relative of the Mediterranean murex was found along the PacificCoast from Ecuador to the Baja.  The snail of the Americas is commonly known as “Purpura” and was used for centuries to obtain the same rich shade produced in Europe.  One important difference between the Mediterranean Murex and Purpura is that the former had to be killed to extract the dye, eventually leading to its extinction; while the snail found on the Pacific Coast can be milked and released back into the sea.  The ancient Mixtec shelldyers understood that the purpura regenerates its ink.  By not harvesting dye during mating season, careful rotation, gently milking only the mature shells and painstakingly replacing them onto the rocks, they were able to conserve the species over several centuries.

Unfortunately in the early 1980’s, a Japanese company called Imperial Purple Inc. nearly decimated the purpura population on the entire Pacific coastline.  The fishermen hired by this company harvested year round, handled the shells roughly and were careless about replacing them to their former resting place.  Within four short years many of the grounds were severely depleted or completely barren.   In 1988 the purpura became protected by the Mexican Federal government, Imperial Purple Inc. was expelled from Mexico and harvesting of the dye became strictly controlled.

Purpura shells are well camouflaged within the rocks of the inner tidal zone but shelldyers are expert at identifying them and gently lifting them out of the water.  By pressing just on the right spot, each snail releases their milky white liquid directly onto the skeins of cotton before being cautiously returned to their hiding place.  The cotton strands first turn yellow but with prolonged exposure to the sun and oxygen the color transforms, as if by magic, to turquoise then blue and finally purple.  What is so unique about this dye, making it so sought after, is that the fabric does not fade with exposure to the sun but the intensity actually deepens over time.

Purpura snails from this region are recognized as a national treasure and are protected by the Federal Government.  With an average life span of about 11 years the prognosis for their survival is positive. Unfortunately the population continues to diminish due to fishermen poaching for seafood.  At one time the shelldyers were able to dye several skeins of cotton in a day, now they are lucky to complete just one.  This is making the dye more expensive and hence less competitive, especially in a market including synthetic dyes and fabrics. 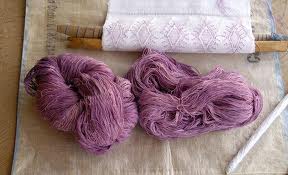 Historically cotton dyed with purpura was traded as far away as Costa Rica.  Today it is used only by the local women who weave it into either a “reboso” (a shawl worn over the shoulders) or a “posahuanco” (a wrap around skirt traditionally worn by coastal Mixtec women). This traditional skirt has bands of dark, indigo dyed cotton, purpura dyed cotton and red silk.  Although no longer worn routinely, these skirts are still held in high esteem by Mixtec women.

A genuine posahuanco not only confers status, the Purple color is associated with fertility and many women of this region continue the tradition of being married in one of these garments.  It could take the milking of up to 1000 Purpura to color just one purple reboso and as indigenous culture becomes more integrated and as traditional dresses become more expensive; fewer younger women are wearing them.

The dyers, from Pinotepa de Don Luis, are the last traditional shell dyers on the planet. What they are doing is rare, amazing and spectacular.  It would be unfortunate if the last of the great shell dyeing traditions were to disappear due to extinction of the species; an equally great tragedy would be that the craft is lost because they were unable to compete with a cheaper synthetic fabric.

Written by Brooke Gazer – Brooke runs a Bed and Breakfast in Huatulco www.bbaguaazul.com and is a writer for the Huatulco Eye magazine.

Eric Minding offers a nine day tour where you can see the production of a wide range of Mixtec and Zapotec textiles in the Pacific coast region of Oaxaca.  Part of this tour includes a day with a shell dyer so that you can witness the purpura dyeing process first hand.    This trip is only offered once or twice a year to a limited number of participants. For more information http://traditionsmexico.com