Ecotourism in Mexico – Saving Turtles on the Oaxacan Coast 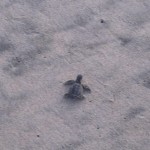 Ecotourism is defined as responsible travel to natural areas which conserve the environment and improve the welfare of the local people. And this is exactly what La Ventanilla, a small village on a beach and lagoon, is accomplishing. Best known for their ecotourism centre, its` community volunteers to protect its` land, plants and animals.

La Ventanilla is located 15 minutes from Puerto Angel, in the municipality of Santa Maria Tonameca. It consists of a long, untouched stretch of undeveloped beach and lagoon wedged between the Pacific Ocean and the Sierra Madre del Sur mountains. In the 1990`s, the area was nothing more than a coconut plantation with three families living there. During this time the Ecosolar group worked to help after the ban on the sea turtle and crocodile trade eliminated most people’s livelihoods. This group, along with ten local families began working to offer tours in the lagoon and beach areas, inviting biologists and biology students from Mexico to study the area. Today, the area is home to more than twenty five Zapotec families dedicated to preserving the ecology of both the beach and the lagoon.

In 1997 the lagoon was destroyed by Hurricanes Pauline and Rick. Both the trees and mangroves were destroyed and it took a month for residents to clean up the area. The decision was made to replant trees and over 30,000 mangroves to help the area recover and include ferns, royal palms, mahogany, parota and ceiba. This replanting was done with seeds collected from the remaining healthy plants in the lagoon. This hard work has resulted in the lagoon`s significant recovery.

The main local cooperative that conducts tours is called Servicio Ecoturisticos de La Ventanilla and the income from these tours support reforestation and other ecological projects. Tours are available on both land and canoe to see the mangroves, and the wildlife, especially the birds, iguanas and crocodiles in their natural habitat. On Uma Island, in the lagoon, there is a greenhouse for mangrove reforestation, a nursery to hatch and raise crocodiles for release, as well as captive deer, and other animals. This group is headquartered at a palapa within the village and there is also a small restaurant on the lagoon island.

The village does not allow motorized vehicles on the beach or within 100 yards of the lagoon sanctuary.

Please note: There is another tour cooperative that operates in the lagoon area, which provides a shorter walking tour that does not include the island, nor does its profits help support conservation efforts.
Sea Turtles at Ventanilla

Ventanilla means `little window` and derives from the small opening in the high rocky peak at the east end of the beach. The fine white sand and clear waters extend all the way down to Puerto Escondido. During certain times of the year, sea turtles come to lay their eggs on these beautiful beaches. Once the eggs are laid and the turtles return to sea, the community volunteers to protect the eggs, gathering them and reburying them in a safe spot. This spot is monitored daily by the volunteers. After about 3 months the baby turtles hatch and are safely released back into the ocean. At sunset during times when the sea turtles lay their eggs, visitors can accompany volunteers as they collect eggs and can participate in the release of baby turtles. They will ask you for a donation to release the turtles by hand. This donation helps support conservation efforts.

Mazunte comes from the Nahuatl word `Maxontetia` meaning “I ask you to please lay your eggs”. In the town of Mazunte is the Centro Mexicano de la Totuga (Mexican Tortoise Centre). This centre is the only of it`s kind in the world as it investigates sea turtles, welcomes visitors interested in observing the miracle of turtle life on the beach, and attempts new growth plans for the economic development of the Coastal villages. These villages used to live off turtle exploitation before the advent of industrial procedures for their capture and its subsequent ban. Mazunte has a Museo Vivo de la Tortuga Marina (Live Sea Turtle Museum) and administers several bungalows for those who desire to witness the reproduction of thousands of sea turtles in the beaches of Oaxaca.

Check out this great website for more information on Ecotourism in the State of Oaxaca.